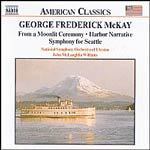 "This Naxos release serves as an exceptional ear-opener in documenting just how substantial and individualistic was his achievement as a nationalist composer...The word "evocative" leaps to mind..." Fanfare

"This is not the first foray into obscure American composers by the Ukranian forces, and they do a bang-up job of it...Some of the credit undoubtedly goes to guest conductor Williams."
- John Sunier Audaud.com July-August 2001

The National Symphony Orchestra of Ukraine was originally formed in 1937, but three years ago was given the accolade of carrying the word 'National'. It was conferred by the President of the Ukraine in recognition of its pre-eminence in that sector of the world. It has performed with most of the major East European conductors and toured extensively in the old Soviet Union. In recent years it has ventured further abroad with an auspicious tour earlier in 1997 to England where one critic added that it surpassed the famous Russian National Orchestra. It has recorded frequently for Naxos and Marco Polo, and the critic of the American disc magazine, Fanfare, wrote, that the "orchestra can stand next to the big boys".

A Walk With Ivor Gurney