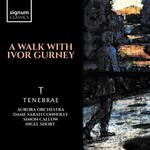 Tenebrae join the Aurora Orchestra with mezzo soprano Dame Sarah Connolly and narrator Simon Callow for 'A Walk with Ivor Gurney', an album of choral music celebrating the works of Ivor Gurney whose promising career as a composer was interrupted by World War I. Alongside four pieces of Gurney's own music are works by his contemporaries, Ralph Vaughan Williams and Herbert Howells. The recording features a new piece by Judith Bingham commissioned by Tenebrae in 2013 for the choir with Dame Sarah Connolly.

"Throughout this disc the singing of Tenebrae confirms their stature as one of the UK's premier chamber choirs. Nigel Short has clearly prepared them for these assignments with great thoroughness and he conducts the programme with evident empathy. The contributions of the Aurora orchestra are excellent too. The technical aspects of the production were in the expert hands of producer Nicholas Parker and engineer Mike Hatch. They've done a fine job. The icing on the cake comes in the shape of Philip Lancaster's outstanding booklet essay which is not only highly informative but also draws the threads of the programme together most successfully.

This imaginatively conceived and superbly executed programme is a wonderful way to honour one of the most tragic figures in twentieth-century British music. Tenebrae have done the memory of Ivor Gurney proud." Recording of the Month MusicWeb 2018

"Even in a smaller space, Tenebrae always sound rich and resonant, and they carry the choral pieces here with absolute control and authority. It's a big listen, but a compelling one and RVW's An Oxford Elegy - one of whose dead was, of course, Gurney - is genuinely moving." Choir & Organ

"Here's a nourishing, thoughtfully compiled release from Signum…Connolly teams up with Tenebrae under Nigel Short's watchful lead to give a performance of breathtaking composure, spine-tingling atmosphere and palpable conviction…if the imaginative concept appeals, this is well worth seeking out." Gramophone

"The disc's title is from an extended piece for soloist and choir by Judith Bingham, commissioned by Tenebrae in 2013 and superbly sung by this top vocal ensemble. This is an album full of riches." The Observer