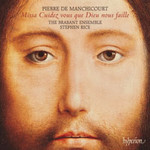 'The music is typical of the high Renaissance, influenced by Josquin and close to the style of Gombert; the Brabant performances all have a wonderful fluency and rhythmic clarity' (The Guardian)

'From the ecstatic opening bars of the Regina caeli, which begins the recital, to the more austere grandeur of Manchicourt's only setting of the Magnificat, with which it closes, there is not a less than thrilling moment on the whole disc. Non-experts will scarcely be aware of the hyper-refined contrapuntal techniques, daring use of dissonance and cross-relations, interspersed with passages of telling homophony; they will simply be swept along by the sheer aural brilliance of Manchicourt's polyphony. With only two previous recordings to its name, The Brabant Ensemble has already established itself as perhaps England's most accomplished interpreter of Renaissance sacred music. Its intelligent phrasing, purity of vocal production and well-judged use of pause and inflexion are simply astonishing. Its vivid presentation of Manchicourt's shimmering, flamboyant polyphony is as moving as it is intellectually stimulating' (International Record Review)

'... The brilliant Easter exultation of Regina caeli is created by Manchicourt's ingenious combination of intricate canonic writing with exciting syncopated rhythms … The Brabant Ensemble's committed and responsive performances' (Daily Telegraph)
'Stephen Rice's superbly talented vocal ensemble features many members of the same family, and there's a great harmony, in all senses, about its work. Here, the Brabant does the 16th-century composer Manchicourt proud' (The First Post.com)

The Brabant Ensemble takes its name from the corner of northern Belgium and southern Netherlands that-as the Duchy of Brabant-hosted a remarkable flowering of compositional innovation in the generation 1520-1560. Under the watchful eye of their eminent musicologist-director Dr Stephen Rice, this talented group's first excursion into this fertile seam of virgin repertoire surveyed the music of Thomas Crecquillon and won a host of warm accolades.

This second recording turns to the lesser-known figure of Pierre de Manchicourt, a master whose neglect seems all the more extraordinary once his output and contemporary renown are explored. Free from the dense textures and complexities which could be associated with the repertoire of this period, we find in Manchicourt music which at once combines melodic invention and astonishing rhythmic ingenuity within a whole of refreshing accessibility.