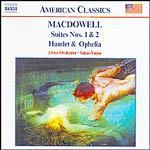 this is the one to get - American Record Guide

"The composer most represented on American Classics is the American most acclaimed a century ago, Edward MacDowell. The late James Barbagallo contributes four volumes of solo piano music; the tenor Steven Tharp and Mr. Barbagallo perform the complete songs; Stephen Prutsman offers both piano concertos, with Arthur Fagen and the National Orchestra of Ireland; and Takuo Yuasa conducts the Ulster Orchestra in the two orchestral suites. ...Mr. Yuasa's empathetic rendition of the Dirge from the once popular 'Indian' Suite (1892) - music MacDowell considered his most affecting - makes a stronger case than any other performance I've encountered."
- "Old Sounds From the New World," New York Times (Joseph Horowitz) July 15, 2001

"Given Yuasa's treatment of the two suites and the low Naxos price, if you already know MacDowell's Piano Concertos and want to hear more, this is the one to get."
- American Record Guide (Haller) May/June 2001