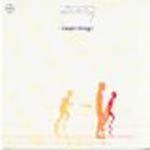 Their debut album, conjuring beautiful lullabies with all the romance of 1960s French-pop.

Zero 7's ability to conjure beautiful lullabies with all the romance of 1960s French pop, as found on their debut long-player Simple Things, would have made them the toast of soundtrack composers and chillout connoisseurs the world over.

Unfortunately, two French men beat Henry Binns and Sam Hardaker to the title of Masters Of Comedown Cool, leaving the London duo to a life time of being termed the British Air. And justifiably so to some degree; the similarities between Zero 7's lush cinematic soundscapes and those of Air's Moon Safari and The Virgin Suicides Soundtrack are so strong as to sound almost intentional.

Nonetheless, their debut is a truly gorgeous album. All the tried and tested atmospheric tricks are in play--bleeps and whooshes layered over plodding Fender Rhodes chords, swathes of strings and tender trumpet parps--but it's Binns & Hardaker's languid grooves and the soft melancholy of their melodies that make dream-state instrumentals "Give It Away" and "Polaris" utterly enchanting.

The real power of Simple Things, however, is in its songs. As beautiful as their ambient strains are, it's when laid beneath the seductive vocals of Australian diva Sia on the ethereal "Destiny" or the heart breaking "Distractions" that their potency becomes apparent.

With such moving tracks as these, Zero 7 dispel the notion that Simple Things is just another collection of nice background music and that they're just riding on Air's coattails.

Songs From a Dictaphone