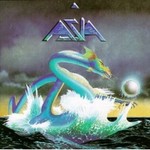 This prog / pop masterpiece was the logical successor to their collective bands of the '70s and the album was an almost instant success. The 'Asia' album exploded onto the music scene in March 1982 with several Top 10 singles and sales exceeding 7 million copies.

The group came together in late 1981, with the guidance of music industry entrepreneur, John Kalodner. John Wetton's acclaimed progressive rock band UK had collapsed a few years earlier. With the help of manager Brian Lane, he wanted to form a new group with guitarist Steve Howe, best known for his work with British Prog superstars, Yes. Drummer Carl Palmer came into the fold next, having just completed a decade of platinum releases and sold out tours with Emerson, Lake & Palmer. Keyboardist Geoff Downes, who replaced Rick Wakeman in Yes for the 'Drama' album, had previously been half of the pop duo The Buggles. They stormed the charts in 1979 with the timeless pop classic "Video Killed The Radio Star".

The first Asia album went into production in June of 1981 with producer Mike Stone at Marcus Studios and Virgin Townhouse in London. Stone, who had worked on hits for Journey and Queen, also knew the band had an amazing musical ability. The band spent five months writing, arranging, and recording nine songs for its debut that included such classics as " Heat Of The Moment", "Only Time Will Tell", and "Sole Survivor."

Labeled a "supergroup" by critics and the media from the onset, it was a tag they had never asked for. Asia's music developed organically and effortlessly. Though all four men had seen chart-topping success in their previous bands, Asia had a special chemistry that fans and music industry insiders were quick to recognize.

As soon as the album was completed, Geffen knew it had a winner on its hands. The upstart label immediately began turning the wheels of its enormous promotional machine weeks before the LP's release, to help propel the album to the top of the charts. Asia had only weeks to rehearse for a 30 city US tour - by the time the band reached the 12th stop on tour, the debut album had already hit #1 on the Billboard charts.

Fortunately for the band, a new music media outlet called MTV premiered on cable channels in 1981 throughout the US and in over 50 million households. (Downes' hit song with The Buggles "Video Killed The Radio Star" was the first song ever played on the exciting new channel). Asia, aware the network's impact on the industry, began shooting videos as soon as the album was finished. The result was a rock 'n' roll marriage made in heaven - Asia became one of the most played acts on MTV in 1982.

Throughout most of '82, Asia ruled the radio airwaves and MTV; sold out every date on its tour; and the LP, 'Asia', crushed all the competition at record stores around the world. The music industry had been in a major slump that year, and less than 15% of releases in 1982 made a profit. Asia was one of the year's big exceptions. By the time the band released its second album, the debut album had sold over 6 million copies worldwide and was the best seller of 1982. It had stayed at the #1 spot for an incredible 9 weeks! The band toured non-stop and continued to see the huge success they had initiated grow even larger. They won almost every "Best New Act" award the industry had to offer in 1982.

The success, however, was too much, too soon. By the time they assembled to begin their second album in the winter of 1983, cracks had already begun to appear in the foundation. Creative tensions and egos - not to mention the pressure of having to top the best selling album of the previous year - made the second album's recording sessions far less enjoyable than the first. Recording the album outside of their native England (in Morin Heights, Quebec) added to the difficulties.

The second album, 'Alpha', did ship platinum and contained the hits "Don't Cry" and "The Smile Has Left Your Eyes", but Geffen's hands-on pressure to score undeniable radio pop hits was starting to show. Personal conflicts on the Alpha tour began pulling the band apart. In October, an announcement was made of a huge MTV and Westwood One Radio Network simulcast of the band's sold out December show at Tokyo's Budokan arena. Instead of a sense of euphoria within the band, John Wetton departed Asia in a move that stunned the rock world. He was replaced at the last moment for the 'Asia In Asia' broadcast and Japanese dates by Palmer's ex-ELP band mate, Greg Lake. Lake's time with the band, however, would be short. The band was re-constructed in 1984, with Wetton back on board, but Steve Howe soon quit to form GTR with former Genesis guitarist Steve Hackett. From there the group disintegrated, although sole original member Geoff Downes carried on releasing albums under the Asia banner, with a series of revolving lineups.

For the next few years, the original members remained busy with their individual projects. John Wetton returned to his solo career and Carl Palmer assembled his own outfit, while Steve Howe re-joined and toured extensively with Yes.

Fate intervened in 2005 when Wetton and Downes found time to work together on new material that would eventually become the 'Icon' album. The duo toured on the heels of the release, revisiting the glory years of Asia with standing ovations every night for the classic tunes. Like a bolt from the blue, the stars aligned once again in early 2006. In April, all four original members of Asia confirmed that they would be reuniting for a world tour to celebrate the 25th anniversary of the band's creation and debut album.