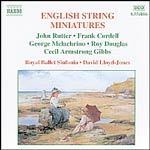 "Performances, as might be expected from Lloyd-Jones and the Royal Ballet Sinfonia are first rate, as is the Naxos recording. Winningly entertaining, and marvelous value for money."
- Gramophone, June 2000

"The Royal Ballet Sinfonia plays all this music with confidence and charm, not to mention good tone. David Lloyd-Jones, one of my favorite English conductors, paces performances that are just right and beautifully phrased, and the recorded sound is...excellent"
- ClassicsToday.com (Rad Bennett)

"If you like English pastoral orchestral music, you will love this disc. It would be hard to find a more ingratiating, lovely and high spirited collection of orchestral gems. Another bargain from Naxos that pleases the senses and the heart."
- Audiophile Audition (Bob Moon), June 2000

British Light Music during the earlier part of the 20th century was divided between the 'serious' classical composers, such as Cecil Armstrong-Gibbs, who also wrote light music, and those whose careers were devoted to this genre, George Melachrino being one of the famous names. Today that divide still exists, John Rutter, composer modern sacred works, equally enjoys working in light music, while Peter Dodd only produces his readily attractive popular music. Between these two points on the musical compass, David Lyon brings a symphonic atmosphere to his light music scores; a similar approach we find in Roy Douglas's Cantilena, and Philip Lane's attractive Pantomime.

As the only regularly contracted ballet orchestra in Britain, the Royal Ballet Sinfonia enjoys a full touring schedule, appearing with Birmingham Royal Ballet in its home town, in London and elsewhere and frequently with The Royal Ballet. The Royal Ballet Sinfonia has appeared with many of the world's other leading ballet companies, including Paris Opéra Ballet, New York City Ballet, Australian Ballet, Les Grands Ballets Canadiens and, most recently, with the Kirov during a London Coliseum season. Concert performances at the Barbican, Royal Festival Hall in London, Birmingham's Symphony Hall and other major British venues form a regular part of the Sinfonia's work in addition to its commitment to ballet. The orchestra's opera performances include The Royal Opera's acclaimed production of Turandot at Wembley Arena. The Royal Ballet Sinfonia's recent recordings include video soundtracks to Birmingham Royal Ballet's Nutcracker, Coppélía and Hobson's Choice and recordings of English string music, the Sullivan overtures, the film scores of Richard Addinsell and The Ladykillers, music from the Ealing Comedies.

David Lloyd-Jones began his professional career in 1959 on the music staff of the Royal Opera House, Covent Garden, and soon became much in demand as a freelance conductor for orchestral and choral concerts, BBC broadcasts and TV studio opera productions. He has appeared at the Royal Opera House, Welsh National Opera, Scottish Opera and the Wexford, Cheltenham, Edinburgh and Leeds Festivals. In 1972 he was appointed Assistant Music Director at the English National Opera and during his time in that position conducted an extensive repertory which included the first British performance of Prokofiev's War and Peace. In 1978, on the invitation of the Arts Council of Great Britain, he founded a new full-time opera company, Opera North, with its new orchestra, the English Northern Philharmonia, of which he became Artistic Director. During his twelve seasons with the company he conducted fifty different new productions, including The Trojans, Die Meistersinger and the British stage première of Strauss' Daphne, as well as numerous orchestral concerts, including festival appearances in France and Germany. He has made a number of very successful recordings of British and Russian music and has a busy career as a conductor in the concert-hall and the opera-house that has taken him to leading musical centres throughout Europe and the Americas.