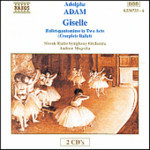 The son of a distinguished piano-teacher at the Paris Conservatoire, Adolphe Adam was born in Paris in 1803. His contemporary popular success depended on a series of compositions for the stage, with much of his later work rendered necessary by the failure of a theatre venture in the revolution of 1848 and the consequent need to pay off heavy debts. These were cleared by the time of his death in 1858. The best known of Adam's eighty works for the stage remains his ballet Giselle or Les Wilis, an archetypal romantic ballet, with ingredients that had already appeared in La Sylphide and were to re-appear in various forms as the century went on.