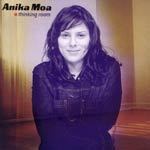 Award-winning singer/songwriter, Anika Moa burst onto the NZ music scene in 2001 with her beautiful debut album, featuring "Falling in Love Again", "Youthful", "Good in My Head", and more.

Singer / songwriter, Anika Moa burst onto the New Zealand music scene in 2001 with her beautiful debut album 'Thinking Room'. Singles such as "Youthful", "Good in My Head", and "Falling in Love Again" became massive hits and led the charge in the renaissance of local music on commercial radio. At the New Zealand Music Awards in 2002, Anika won 'Top Female Vocalist' and 'Songwriter of the Year', while 'Thinking Room' continued selling well, to reach double-platinum status.

Anika was discovered in the Smokefree Rock Quest as a teenager, writing songs that combine emotive lyrics with great guitar pop accompaniment. She made history by becoming the first unknown Kiwi artist to be signed to an American record company (Atlantic Records) for a debut album.

She was 22 years old at the time, but many of the songs on 'Thinking Room' were written while she was growing up. Standout tracks on the album include "Flowers for You", "God and His Culture", and the gorgeous "Falling in Love Again", which was included on the soundtrack of the Julia Roberts' movie 'America's Sweethearts'.

A stint in New York to record and promote the album made her more mature - some of the songs reflect the time she spent in the States. Later, Anika became disillusioned with the whole American process of packaging her in a commercial way, so she returned to New Zealand to let her career take a more natural course in her real homeland.

Aside from Anika's obvious songwriting skills, her talents are nowhere more apparent than when playing live. Anika is a true raconteur - not just holding audiences spellbound with her songs, but keeping them entertained with her witty, often hilarious, between song banter and stories. She has the down-to-earth kiwi humour that wins audiences over in an instant and keeps them returning for more.

"She is going to take the world by storm... Every Instrument exists to support and enhance Moa's voice, as well as illuminate the depth of her notably lyrics and infectious melodies".
- Billboard (March 16th, 2002)

Come Away With Me
more suggestions…