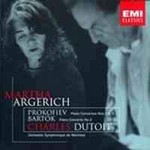 "This disc can be recommended, then, particularly for the Prokofiev and for all Argerich fans. I have never heard her give less than a sterling performance. Indeed, she does not disappoint here. Julian Haylock's notes in the accompanying booklet are informative and succinct."
(MusicWeb Feb 2009)

"This disc can be recommended, then, particularly for the Prokofiev and for all Argerich fans. I have never heard her give less than a sterling performance. Indeed, she does not disappoint here. Julian Haylock's notes in the accompanying booklet are informative and succinct."
(MusicWeb Feb 2009)

Martha Argerich was born in Argentina and made her debut at the age of five. While still a child she gave recitals in Buenos Aires at the Astral and the Colón before moving to Europe where she studied with Friedrich Gulda, Nikita Magaloff and Michelangeli.

At the age of sixteen, Argerich won the Geneva International Music Competition and the Busoni Competition. In 1964 she toured Western Europe and Poland before making her London debut in November that year. In 1965 she won the Seventh Warsaw International Chopin Competition and the Polish Radio Prize for her performances of Chopin Waltzes and Mazurkas. As this collection of awards show, her technical skills are among the most formidable of her generation and her playing is notable for its uninhibited brilliance. It is therefore no surprise that she is considered to be one of the greatest pianists of our time, among such renowned pianists as Michelangeli, Horowitz, and Maurizio Pollini.

EMI Classics has released a number of recordings by Martha Argerich, including a disc containing Beethoven Piano Concerto No 2 coupled with Haydn Piano Concerto No 11 with the London Sinfonietta; a recording of the Debussy and Franck Cello Sonatas with Mischa Maisky and a disc of Schumann's Fantasie Op 17 and Fantasiestücke Op 12. Her discography also includes a disc of Messiaen's Visions de l'Amen with Alexandre Rabinovitch and a collection of Schumann's chamber music, with some of her friends including: Alexandre Rabinovitch, Dora Schwarzenberg, Lucy Hall, Nobuko Imai, Natalia Gutman, Mischa Maisky and Marie Luise Neunecker.

More recently EMI Classics released an album recorded following sensational live performances in Canada and New York, with Charles Dutoit and the Montreal Symphony Orchestra. This three-concerto disc, released in August 1998, features her first ever recordings of Prokofiev's first and Bartok's third piano concertos, as well as Prokofiev's Concerto No 3.

Martha Argerich and Charles Dutoit chose to make these recordings to celebrate forty years of performing together in concerts throughout the world. Their partnership dates back to when Charles Dutoit first began to conduct and Martha Argerich appeared as his first soloist in one of these early concerts. It is for this historical reason that they chose to produce an album together with EMI Classics in 1998.

The collaboration between these two great artists continued in 1999, including two more recordings which have both attracted a phenomenal amount of critical acclaim: a disc of Chopin Piano Concertos Nos. 1 & 2 with Dutoit and the Montreal Symphony Orchestra, which won a Grammy award in March 2000, and a Chopin recital disc recorded in 1965 at the time of the International Chopin Competition.

In July 1999 Argerich released a disc of chamber music by Bartók, Kodaly, Liszt and Prokofiev, including the pianist Nelson Freire. This release was followed closely by a recording of Beethoven, Franck and Schumann Sonatas with Itzhak Perlman, released in September 1999.

In March 2000 two live recordings were released from a series of historic concerts in 1978,1979 and 1992, where Argerich performed with the world-famous Amsterdam Concertgebouw. One is a solo recital including Bach, Chopin, Bartók, Ginastera, and Prokofiev, and the other is a recording of Mozart's Piano Concerto No. 25 in C with the Netherlands Chamber Orchestra and Beethoven's Piano Concerto No.1 in C with the Concertgebouw Orchestra. Both releases include works never previously recorded by Martha Argerich.