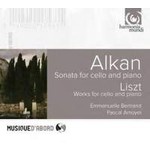 Transcendental virtuosity.
The names of those two illustrious nineteenth-century pianists, Charles-Valentin Alkan and Franz Liszt, are generally associated with a style founded on transcendental virtuosity. Yet both the late works of Liszt, with their funereal and elegiac character, and the splendid Cello Sonata op.47 that Alkan wrote in the middle years of the century, reflect a shared ideal of purified expression and a poetic vision of instrumental music. Chamber music came to be the favoured vehicle for the manifestation of meditative, spiritual and experimental tendencies in the two artists, both of whom possessed a high degree of literary, musical and religious culture.

"this is a refreshing collection where the virtuosity of composers and performers is met with disarming humility." (MusicWeb Sept 2014)

Sonate a tre 'La Follia' / Sonate a due violini

Complete Works for Violin and Orchestra