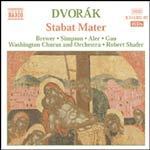 "This live recording adds a distinguished feather to the cap of Naxos... The heartfelt quality of Dvorak's music, affected by the death of his two-day old daughter Josefa, inspires an intense performance from Robert Schafer and his Washington forces. Likewise, the solo line-up fully engage with the work's romantic soul..."
- Andrew Stewart, Music Week, 10 August 2002

Antonín DvoTák was born in 1841, the son of a butcher and innkeeper in the village of Nelahozeves, near Kralupy, in Bohemia, and some forty miles north of Prague. It was natural that he should at first have been expected to follow the family trade, as the eldest son. His musical abilities, however, soon became apparent and were encouraged by his father, who in later years abandoned his original trade, to earn something of a living as a zither player. After primary schooling he was sent to lodge with an uncle in Zlonice and was there able to acquire the necessary knowledge of German and improve his abilities as a musician, hitherto acquired at home in the village band and in church. Further study of German and of music at Kamenice, a town in northern Bohemia, led to his admission in 1857 to the Prague Organ School, where he studied for the following two years.

On leaving the Organ School, DvoTák earned his living as a viola-player in a band under the direction of Karel Komzák, an ensemble that was to form the nucleus of the Czech Provisional Theatre Orchestra, established in 1862. Four years later Smetana was appointed conductor at the theatre, where his operas The Brandenburgers in Bohemia and The Bartered Bride had already been performed. It was not until 1871 that DvoTák resigned from the orchestra, devoting himself more fully to composition, as his music began to attract favourable local attention. In 1873 he married a singer from the chorus of the theatre and in 1874 became organist of the church of St Adalbert. During this period he continued to support himself by private teaching, while busy on a series of compositions that gradually became known to a wider circle, particularly with the success of his Hymnus: D"dicové bílé hory (The Heirs of the White Mountain) for the Prague Hlahol Vocal Society.

Further recognition came to DvoTák in 1874, when his application for an Austrian government award brought his music to the attention of Brahms and the critic Eduard Hanslick in Vienna. The granting of this award for five consecutive years was of material assistance. It was through this contact that, impressed by DvoTák's Moravian Duets entered for the award of 1877, Brahms was able to arrange for their publication by Simrock, who commissioned the Slavonic Dances, for piano duet. The success of these publications introduced DvoTák's music to a much wider public, for which it held some exotic appeal. As his reputation grew, there were visits to Germany and to England, where he was always received with greater enthusiasm than might initially have been accorded a Czech composer in Vienna.

In 1883 DvoTák had rejected a tempting proposal that he should write a German opera for Vienna. At home he continued to contribute to Czech operatic repertoire, an important element in re-establishing national musical identity. The invitation to take up a position in New York was another matter. In 1891 he had become professor of composition at Prague Conservatory and in the summer of the same year he was invited to become director of the National Conservatory of Music in New York, an institution that was intended to foster American music, hitherto dominated by musicians from Europe or largely trained there. Whatever the ultimate success or failure of the venture, DvoTák's contribution was seen as that of providing a blueprint for American national music, following the example of Czech national music, which owed so much to him. There were musical results in his own work, notably in his Symphony 'From the New World', and chamber music of the period, works that rely strongly on the European tradition that he had inherited, while making use of melodies and rhythms that might be associated in one way or another

with America. By 1895 DvoTák was home for good, resuming work at the Prague Conservatory, of which he became director in 1901. His final works included a series of symphonic poems and two more operas, to add to the nine he had already composed. He died in Prague in 1904.

In 1884 DvoTák visited England for the first time, conducting there his Stabat Mater. A second invitation took him back to England, to Worcester, in the autumn, when the Stabat Mater was heard again. 1885 brought a third visit to London and his connection with England continued, particularly in choral works that were well suited to the flourishing traditions of choral music there. Scored for four soloists, chorus and orchestra, the Stabat Mater was begun in February 1876 and completed in November the following year, and the first performance was given in Prague in December 1880. The first performance in London had been given in 1883 by the London Music Society, under the direction of Joseph Barnby. The performance conducted by the composer the following year was given at the Albert Hall, and marked the start of a connection with England that was confirmed in further visits.

The Stabat Mater opens with an extended setting of the first four verses of the traditional text, for soprano alto, tenor and bass soloists and chorus, the mood of sad contemplation reflected in the key of B minor and the descending contour of the melodic lines. The tenor soloist introduces the second verse, as the key moves into D major, and the soprano starts the third verse, the bass soloist the fourth, before a return to the first verse brings a dramatic climax. The E minor setting of Quis est homo and the following three verses is entrusted to the soloists, and the C minor Eia Mater is a solemn choral movement, followed by the B flat minor Fac ut ardeat, introduced by the bass soloist, the chorus adding the following plea.

There is a lightening of mood and quicker pace in the E flat major choral Tui nati vulnerati, with its 6/8 metre, given weight by the contrapuntal central section. Tenor soloist and chorus share the B major setting of Fac me vere, with the touches of melancholy the texts dictate. This is followed by the gentle hymn-like

A major Virgo virginum, for chorus. Fac ut portem Christi mortem is scored for soprano and tenor soloists and introduced by the woodwind and horns in a D major Larghetto. The two voices are intertwined in a movement dominated by the opening motif in music of pious optimism. The following D minor Inflammatus et accensus is resolutely baroque in feeling, its alto solo above the onward tread of the bass-line. There is a contrasting central section in what is in fact a heartfelt da capo aria. The four solo voices return with the chorus for the final Quando corpus morietur, with its initial reminiscence of the opening of the whole work, the key of B minor giving way to a final D major that hymns the glory of Paradise in a great climax of sound. This leads to the splendid optimism of the concluding Amen.

DvoTák wrote his setting of Psalm CXLIX in 1879 response to a commission from the Prague Hlahol Vocal Society, which gave the first performance in March that year. The original setting, which was for male voices, was revised by the composer and published in a new version for mixed choir in 1888. The first performance of the revised work seems to have taken place in February 1890 at Olomouc, although there is an earlier claim to priority from Rotterdam and a further suggestion that the work in this form might first have been heard in Boston. Whatever the validity of these claims, they certainly indicate something of the composer's contemporary popularity, and the particular affection felt by choral societies for his work. The text is taken from the Bible of Kralice, the translation made between 1579 and 1593 by the Unitas Fratrum, later the Moravian Church. The C major setting is largely homophonic, a solid hymn of praise, with occasional antiphonal use of male and female voices and a change of mood for a short passage marked quasi recitativo at the heart of the work. The resolutely vigorous mood soon resumes, assisted, as before, by trumpets and drums.
- Keith Anderson