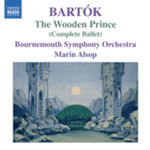 "Alsop and her orchestra do justice to Bartók's most overtly romantic large-scale score; it's a performance that will surely appeal beyond the ranks of Bartók devotees to balletomanes generally."
(Gramophone)

The Wooden Prince is a fairy tale ballet with an original story by Bartók's literary acquaintance Béla Balázs, who had also written the libretto to Bluebeard's Castle (available on Naxos 8.660928). Though outwardly sunny in its subject matter, The Wooden Prince has a mystical side that may explain Bartók's attraction to the story. The ballet's opening pages have often been compared to the opening of Wagner's Das Rheingold, and the majestic heart of the score lies in the glorious music Bartók wrote to accompany the prince's apotheosis.