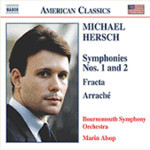 Championed by distinguished conductors such as Marin Alsop and Mariss Jansons, since his mid-20s, Michael Hersch's music has been performed by leading orchestras and concert artists.

Intensity and passion always increasing…
This marking found in Michael Hersch's Symphony No. 1 best sums up the American composer's music. His output abounds with extreme shifts in dynamics and texture, often searing in effect. Both poles are equally represented: emotional outbursts of anger or ecstasy and lengthy bouts of despondency or gloom. His orchestral music can rise to multiple forte only to quickly drop to an intimate whisper. And while his music inhabits new worlds of unsettling vast expanses, it somehow maintains a spiritual connection to the past. It is for these potent qualities and more that conductors such as Marin Alsop, Mariss Jansons and Robert Spano; performers such as

Garrick Ohlsson and Midori; and ensembles such as the String Soloists of the Berlin Philharmonic have championed Hersch's music.
It should come as no surprise that the shifting tectonic plates of Hersch's music would reflect those within the composer himself. Born in Washington, D.C. in 1971, Hersch indeed followed an unusual path to composing. He is a rare and seemingly contradictory combination of a late bloomer and a prodigy.

It was not until almost his nineteenth year that Hersch discovered his desire to compose. His brother Jamie, a gifted horn player, finally prevailed on the taciturn teenager to listen to Beethoven's Fifth Symphony. Watching a video conducted by Sir George Solti seemed to burst a dam inside him. Soon after he enrolled at the Peabody Conservatory in Baltimore, where he quickly mastered technique and exhibited an affinity for the pacing and structure of large-scale composition. Hersch's memory and ear greatly impressed his teachers and he also excelled at the piano, whether performing his own works or those of composers ranging from Josquin to Boulez. In 1997, before he had even graduated, Hersch became one of the youngest composers ever awarded a Guggenheim Fellowship in Music.

The year before, his music caught the ear of Alsop, who selected Hersch as First Prize winner of the American Composer Awards. In subsequent years, the conductor consistently programmed Hersch's music and helped to instill confidence that his voice was a worthy one. That relationship has continued to this day, leading to the present disc of definitive recordings with the Bournemouth Symphony Orchestra. Hersch's Symphonies Nos. 1 and 2, Fracta and Arraché survey his output in the orchestral realm and chart the evolution of his voice.

It was with his Symphony No. 2 (2001) that Hersch's orchestral language seemed to cement itself. Impressed with his work Ashes of Memory (1999), Jansons and the Pittsburgh Symphony Orchestra commissioned the symphony, which received its première in April 2002. A stylistic transformation, however, had taken place in between the composing of the two works. More and more, Hersch's music had begun to incorporate an innovative use of complex clusters, rather than triads, as the foundation of his harmonic language. First explored in chamber music such as his Octet, which the composer calls a "pivot point" to his mature style, the new approach flowered in the Second Symphony.

The four-movement work opens with a demonic fury, but gradually its underlying essence emerges. First a disjunct melody appears played by a solo violin/piccolo. Then the clusters that serve as the bedrock of the symphony are revealed, overflowing into the second movement. The third movement introduces the heart of the work: a pristine melody that expands gloriously through dense counterpoint. This marks one of the few times in Hersch's oeuvre that an expressly melodic theme appears, and the result is exquisite indeed. The finale fluidly recapitulates the various themes with careening highs and lows before concluding with a quiet cluster in the lower strings. It is worth noting that Hersch completed this work in the months immediately following 11 September, 2001, although the composer makes no mention of a connection.

The Pittsburgh Symphony Orchestra's impressive commissioning history with Hersch also includes Fracta (2002), which had its première in April 2003, with Claus Peter Flor conducting. The conception of this piece is intriguing. After hearing his work for clarinet and cello, After Hölderlin's 'Hälfte des Lebens', performed at the Pantheon in Rome during the RomaEuropa Festival (by Walter Boeykens and Ilia Laporev, respectively), Hersch was so struck by the reverberant effects he "reconceived" it for orchestra as Fracta.

But Fracta is no ordinary orchestration project. Extra measures and music entwine the original material, approximating the actual Pantheon reverberation and attempting to reproduce Hersch's awe. Through it all, the newer work seeks to retain the original's evocative interpretation of Friedrich Hölderlin's poem, especially its bleak and melancholy second stanza: "Alas, when winter comes / Where shall I find the flowers and where / The sunshine, / Where the shadows of the earth? / The walls stand / Speechless and cold, in the wind / The weathervanes clatter."

While Hersch's earlier music harbours some traditional qualities, it is far removed from the vast majority of orchestral music popular in the 1990s and today. In 1998, the then 27-year-old composer completed his Symphony No. 1, first given by the Dallas Symphony the following year. The one-movement work shows a young composer influenced by Mahler and Berg, but already branching out with his own aesthetic. In particular, he displays here his natural flair for development. Themes and harmonies evolve from motifs presented at the onset, and increasingly these permutations are confronted or supported (at times both simultaneously) by a recapitulation of the opening material.

While Symphony No. 1 is not programmatic, Hersch lays out a discernible musical path that begs interpretation. When chimes, symbolic of death, initiate the piece, ringing a dissonant interval of a minor ninth, it portends a rough journey ahead for the work's implied protagonist. Although layered and soaring, the symphony might be boiled down to one question: will that dissonant interval resolve to a stable unison, signifying redemption of spirit?

At first the outlook is bleak. A funeral march follows with a pulsing drone on C, leading to a wistful theme articulated in the flutes and violins. Episodes follow, while the chimes continue to enter sporadically, commenting almost like a Greek chorus. The tumultuous voyage leads to a central Allegro, a battlefield of counterpoint that pulls the elegiac work from its brink and ushers in a varied return of the opening strains. A series of escalating codas leads to the moment of truth: the symphony does indeed end with the chimes sounding a unison C. Dark as life is, perseverance is rewarded.

The most recent work on the disc, Arraché (2004), contains more connection to political events than is typical for Hersch. Commissioned by the Baltimore Symphony Orchestra to inaugurate its new Music Center in Strathmore, Yuri Temirkanov led its première in February 2005. "Throughout the summer of 2004, it was all too frequent that I would see, read or hear reports relaying the fates of hostages taken in Iraq", says Hersch. "The imagery was simply impossible to shake." "Arraché", French for "torn away", is not blatantly descriptive, but is "impacted by thoughts of those terrifying, wrenching events."

Arraché opens softly with two brooding themes. The first is a series of clustered harmonies that emanate from muted strings. From this grows a chorale-like figure, darkly coloured in the bassoons and clarinets. Could this then be a prayer for strength against the evil about to be relayed? In any case, the listener is indeed "torn from" this anxious reflection by a leaping, angular theme that ushers in a dense and spiky allegro.

The aggressive music drives forward with such compelling momentum, urged on by potent secondary motifs, that one does not realise Arraché uses no percussion. The thematic content eventually dissolves into a furious quadruple fugue, perhaps symbolic of how the newscast has overwhelmed the viewer's senses. The opening material soon returns in a condensed stratum. The piece closes with quiet angst as the viewer turns away from the horrific news, but not the concomitant dejection.