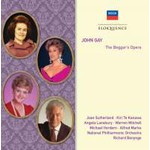 In 1981 Richard Bonynge, together with an illustrious cast of singers (Joan Sutherland, Kiri Te Kanawa, et. al.) and actors (Angela Lansbury, Warren Mitchell, Michael Hordern, et. al.) went into Kingsway Hall for a recording of a new edition (by Richard Bonynge and Douglas Gamley) of John Gay's The Beggar's Opera. Written in 1728, it is a ballad opera in three acts (Ballad operas were satiric musical plays that used some of the conventions of opera, but without recitative. The lyrics of the airs in the piece are set to popular broadsheet ballads, opera arias, church hymns and folk tunes of the time.) Running for 62 consecutive performances, the piece notched up a record the longest run in theatre history up to that time. Unlike other existing recordings of The Beggar's Opera, this new performing edition features opera stars alongside great actors as well as a full-size (double woodwind) orchestra. One of the most sought after of Sutherland/Bonynge collaborations, the original CD has long been out of print and here reappears with the original liner notes as well as the full libretto.

Forest of Dreams - Classical Lullabies to Get Lost In
more suggestions…