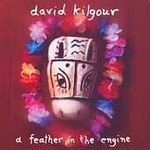 David Kilgour
A Feather In The Engine

His most varied and elegant album so far... "This is more than indie rock heaven - this is real rock heaven."-The New York Press.

"This is more than indie rock heaven - this is real rock heaven."
-The New York Press

"a combination of sparkling acoustic and electric guitars and semi-electronic backings - with some of the grandest arrangements and most pop-direct songs Kilgour has committed to tape."
-Russell Baillie, NZ Herald

"It's that rare sort of just-about-perfect record that demands to be played over and over again."
-Magnet

"A wondrous listen that tosses jangling pop and psychedelia with such ease that you'd be forgiven for thinking he could do this in his sleep."
All Music Guide

"A Feather in the Engine finds the leader of The Clean in fine form. With the same youthful exuberance he brought to post-punk, Kilgour tackles psyche with a wide-eyed, color-blast energy that's exciting."
-Static Multimedia

"Kilgour has managed to craft an album that unleashes a hefty dose of beauty on the world, and that's something we can always use." -Pitchfork

'A Feather In The Engine' has been written and recorded primarily in David's home studio in Dunedin where he has a 24 track installed . Other recording and writing has been completed in Nick Roughan's studio in Auckland where it was also mastered.

Although this album is probably Davids most "solo" album to date he has used a various other musicians here and there. Heavy Eights members Tane Tokona (drums), Thomas Bell (bass & guitar),Noel Ward (bass) all contribute to the album. Of note there is a beautiful string arrangement by Graeme Downes (Verlaines) for the song "Instra 2 Reprise" utilising a string quartet. Also the influence of Nick Roughan is evident on tracks like "I Caught You" and "Today Is Gonna Be Mine".

The album is a melodic sweep of differing intertwined landscapes. The signature Kilgour guitar swirls and cascades cementing timeless melodies. Psychedelic instrumentals, acoustic folk, three chord rock 'n' roll, ambient sonics and much much more. Allow yourself to be swept away for a few minutes, a few hours, or a few days. You are assured it will be time well spent.

HISTORY: David Kilgour first started playing guitar as a teenager in the late 70's. When he and his brother decided to form a band, they called themselves The Clean.

The Clean went on to become one of the most popular and respected bands in New Zealand, and their legend as one of the founders of underground music's most influential "scenes" quickly spread to all corners of the globe. In 1992 David struck out on his own with his first solo album 'Here Come the Cars' which received much critical acclaim and ended up on many year-end top ten lists. Two more solo albums followed, 'Sugar Mouth' in 1994 and 'The Heavy Eights' in 1997. Also an album of outtakes and demo's, 'First Steps & False Alarms', was released by Ajax records in the USA in 1995. More recently The Clean released their triumphant 'Getaway' album on Flying Nun Records.

Now David has released his 5th solo album. 'A Feather In The Engine' on Arclife Records.

Sept. 98
Slippery Slide
All The Rest
The Perfect Watch
Instra 2
I Lost My Train
Time to Run
Today Is Gonna Be Mine
I Caught You
Instra 2 (reprise)
Wooden Shed
Which One
Backwards Forwards