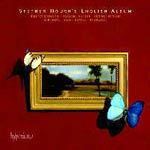 'Powerful, sympathetic and beautifully recorded, and his fans everywhere will be thrilled' (BBC Music Magazine)

'Hough's performances are magical - scintillating, refined, sensuous in the smaller works, commanding and powerful in Rawsthorne and Leighton. I hope this superb pianist records many more recitals of British music' (American Record Guide)

'The English Album', which is very close to Stephen Hough's heart, should be thought of as an addition to his very successful series of 'Piano Albums'. In fact this recital started off with material left over from his 'New Piano Album' (CDA67043).

This disc is a tribute to the English school of piano composition - mostly a 20th century phenomenon, and the material is very much a personal selection rather than an encyclopaedic overview. The mood is predominantly lyrical and nostalgic (perhaps very English phenomena), and most of the pieces are very much the kind Stephen might present as encores. There is some serious 'meat' though in the form of Leighton's Study Variations.

The pieces represented here form a major addition to the piano repertoire and add to the growing recognition, some fourteen years after his death, that in Kenneth Leighton we have a major composer indeed.