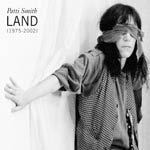 Patti's best tracks plus some rarities! A fantastic premium package double disc collection from this landmark figure in musical history.

Patti Smith is without a doubt a landmark figure in musical history, considered by many "a poet whose energy and vision found its voice in the most powerful medium of the culture: rock and roll."

'Land 1975 - 2002' marks the first compilation of her incredible career, combining tracks from her previous 8 legendary albums.

A double-CD package, 'Land 1975 - 2002' contains:
- one disc of single sides and album tracks that were chosen by Patti's numerous fans.
- a second disc consisting entirely of material. previously unreleased, including demo and alternate takes, live tracks, poetry, rarities + her new recording of Prince's "When Doves Cry."