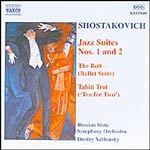 "So is this another winner from Naxos? I think so...This is Svetlana's old band, so you can expect colourful winds and penetrating brass...Try the Weill-like 'Foxtrot' from the Jazz Suite No 1 (track 19) and I dare say you'll be hooked: those trombone glissandos are nicely done, the Hawaiian guitar slyly insinuating."
- David Gutman, Gramophone July 2002

"In no other composer I can think or - even those who, like him, dealt creatively with folk-song material...do I find quite the same combination of lyric awe and simplicity, of sardonic humour, grotesquerie and epic, of shared communal values, of long local traditions that span the ages and, above all, of humanity and nature totally involved with one another, and each being accorded their perfect balance."
- Calum MacDonald, International Record Review June 2002

Although the symphonies, string quartets and concertos represent the core of his achievement, Shostakovich had wide sympathies across the musical spectrum: hence his oft-repeated comment that he enjoyed all music from Bach to Offenbach. Moreover, the revival in recent years of such works as his 1958 musical Moscow-Cheryomushki attests to a composer who entered into the spirit of 'light music' with enjoyment and enthusiasm. All of the works on this disc will come as a surprise to those who know Shostakovich only as a concert composer in the Beethovenian tradition.

Shostakovich's three ballet scores belong to his early radical years, roughly 1926 to 1934, when he was working in a variety of media while, perhaps not altogether consciously, avoiding the symphonic domain he was later to make his own. After the short-lived success of his first ballet The Golden Age (1930), he completed its follow-up, The Bolt, less than six months later. Produced at Leningrad's Kirov Theatre on 8th April 1931, Fyodor Lopukhov's scenario of industrial espionage was the pretext for music drawing on circus-like farce and the constructivism made notorious by Stravinsky and Prokofiev's work for the Ballets Russes in Paris. Despite, or perhaps because of, its topical quality, the USSR being in the midst of Stalin's first Five Year Plan, The Bolt closed after only a handful of performances, and was never revived as such in the composer's lifetime.

Shostakovich duly prepared a suite of eight movements from the ballet, given its first performance by Alexander Gauk and the Leningrad Philharmonic Orchestra on 17th January 1933. Shostakovich discarded two movements prior to publication a year later (in this form, the piece became known as Ballet Suite No. 5, following on from the four suites prepared by Levon Antovmyan from the composer's stage music in the early 1950s), but the present recording resorts to the original order.

Following the Introduction, a thunderous overture with more than an affectionate side-swipe at Tchaikovsky's ballet music, the polka of The Bureaucrat gives the bassoon a starring rôle in its high jinks. The Drayman's Dance is a brief sequence of variations on a full-blooded theme, very much in the style of folk-ballets such as Gliere's The Red Poppy. Kozelkov's Dance with Friends looks rather to the popular dances of the decadent Western bourgeoisie, notably the tango, for its representation of the villains of the ballet. Intermezzo is a strutting rhythmic piece, with a more rhapsodic central section, of the type familiar from Shostakovich's theatre and film scores. Dance of the Colonial Slave-Girl is another folk-inspired number, alternatively moody and frenetic, while The Conciliator has a circus-like gaiety, thanks to a scintillating display from solo xylophone. The General Dance of Enthusiasm and Apotheosis ends the suite, and the ballet, in a mood of uproarious panache. Shostakovich wrote numerous such finales during this period, but none matches this for sheer élan. Perhaps its over-the-top quality was just too much for the Soviet authorities to take.

Despite his immersion in popular theatre and vaudeville during the late 1920s and early 1930s, Shostakovich did not attempt a specifically jazz-orientated work until 1934, when he entered a competition in Leningrad whose aim was to elevate jazz from café music to a more serious status. The three-movement Jazz Suite No. 1 achieves this with deft precision. After the languorous Waltz, with its indelible trumpet melody, the Polka presents a brittle but humorous façade. The mock- pathos of the Foxtrot closes the suite, with enough ambivalence in its bluesy harmonies to indicate that Shostakovich was capable of investing the jazz idiom with altogether more serious emotions.

A Second Jazz Suite, written for Victor Knusnevitsky and his State Orchestra for Jazz, followed in 1938, but the score was lost during World War Two. It was not heard again until 2000, when the emergence of a piano score enabled the composer and musicologist Gerard McBurney to prepare three movements for performance at the Last Night of the Proms in London (the material for further movements has since come to light). What became known as Jazz Suite No. 2 is actually a suite for theatre or 'promenade' orchestra, with saxophones and accordion prominent, drawn from various ballet, film and theatre scores.

The opening March brings a sturdy Russian-ness to its Lehár-like brio, which the Lyric Waltz contrasts with its insinuating saxophone theme, given soulful treatment by the whole orchestra. The effervescent First Dance has become better known as Public Holiday from Shostakovich's 1955 score for the film The Gadfly. The First Waltz is an affectionate nod towards Tchaikovsky's Nutcracker, then the Little Polka entertains with its catchy xylophone-led tune. The Second Waltz, featuring another sinuous saxophone melody, recently found popularity as the title music for Stanley Kubrick's last film, Eyes Wide Shut. The hornpipe-like gait of the Second Dance has an engaging folksy quality, then the Finale brings the suite to a spirited and good-humoured conclusion.

Shostakovich's involvement in popular music came about quite fortuitously, as the result of a bet with the conductor Nikolay Malko, who had given the first performance of the First Symphony in 1926, to orchestrate Vincent Youmans' famous number Tea for Two from his musical No No Nanette. Challenged to complete his orchestration within an hour, Shostakovich needed only forty minutes. The result, alternately witty and nostalgic, was first heard in Moscow on 25th November 1928, when Malko performed it under the title Tahiti Trot. The piece was soon played by dance bands and theatre orchestras everywhere, and Shostakovich astutely included it in his ballet The Golden Age, where it became a regularly encored item. Like so much of his music from this period, it disappeared as the Stalinisation of the Soviet Union proceeded apace, only to be revived in the years immediately following the composer's death in 1975.
- Richard Whitehouse

Orchestral works (Incls The Ballad of Blanik & 'The Excursions of Mr. Broucek' Suite)