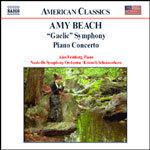 "Prepare to be thrilled by the melodic invention and charming rhythmic energy of this music. Well worth exploring."
- Editor's Choice - Gramophone Magazine (June 2003)

"The name Amy Beach (1867-1944) is probably best known to music lovers because (a) she is one of the very few pre-20th-century women composers and (b) because of her chamber and instrumental music and songs. Well, all that is set to change with this very fine Naxos disc coupling her delightful Piano Concerto and Gaelic Symphony. Prepare to be thrilled by the melodic invention and charming rhythmic energy of this music. Well worth exploring."
- Editor's Choice - Gramophone Magazine (June 2003)

Amy Beach was the first American woman to succeed as a composer of large-scale musical works. The most frequently performed composer of her generation, she became famous in both the United States and Europe. The two works on this disc, the Concerto in C sharp minor, Op. 45, for piano and orchestra, and the "Gaelic" Symphony in E minor, Op. 32, are among her most imposing and exciting compositions.

Amy Beach was born Amy Marcy Cheney, in West Henniker, New Hampshire, during an era when the world of work was divided into two spheres, the private and domestic for women, the public for men. Gifted with perfect pitch, total recall, inborn ability at the piano and in composition, she knew even as a young child that "no other life than that of a musician could ever have been possible for me". Yet her parents said no to a professional career for Amy. With hard work and determination she succeeded, despite the limitations imposed by family and society. Her childhood and early teens were devoted to piano studies. Her first private recital at the age of seven earned her a review in a local paper. Her mother "allowed" her to make her début when she was sixteen. After hearing her play Moscheles's Second Concerto with orchestra, a dozen reviewers predicted an outstanding career as a concert pianist. In 1885, when she made her début with the Boston Symphony Orchestra, critics called her playing of Chopin's Second Piano Concerto "perfect."

Marriage at the age of eighteen to Henry Harris Aubrey Beach, M.D., changed Amy Beach's career path. Her husband, 25 years her senior, replaced her parents as authority figure. She agreed, after some resistance, to limit public performance to one annual recital. Composition, said Henry, was to be her métier: he even allowed her to publish her compositions, but under her new name, Mrs. H. H. A. Beach. Denied a teacher, she taught herself orchestration and composition, with remarkable success.

During 25 years of marriage, Amy Beach composed not only the symphony and the concerto but also songs, chamber, choral and solo piano music. Widowed at 43, she went to Germany to present her compositions and revive her career as a pianist, under the name Amy Beach. On her triumphant return to Boston in 1914, she devoted herself to concert tours and composition, completing the balance of her three hundred works, almost all published and performed. Long a hero to women composers, she died 1944 in New York City at the age of 77.

Amy Beach's Piano Concerto in C sharp Minor, Op. 45, was composed in Boston between September 1898 and September 1899, and revised in the following months. The work is scored for pairs of flutes (piccolo), oboes, clarinets (bass clarinet), and bassoons, four horns, two trumpets, three trombones, tuba, solo piano, timpani, and strings. It was first performed on 7th April 1900, with the composer as soloist and the Boston Symphony Orchestra under Wilhelm Gericke, in Boston's Music Hall. In 1900 Arthur P. Schmidt Company of Boston published the concerto in a two-piano version. Beach later played the concerto with the Chicago, Philadelphia, Leipzig, Hamburg, and Berlin orchestras, among others.

With this concerto Amy Beach brought together the two halves of her musical life, composition and performance. Even before it was completed she was asked to play its première with the Boston orchestra. They knew her as a soloist, for she had played concerti by Chopin, Mozart, Beethoven, Mendelssohn, Schumann and Saint-Saëns with the orchestra, and as composer of her symphony, of which they had given the first performance.

Beach wrote that the concerto's first movement, in sonata form, is "serious in character, piano and orchestra vying with each other in the development of the two principal themes". Marked Allegro moderato, the orchestra introduces the first sombre theme, followed by the piano's passionately intense cadenza. The piano introduces the second theme, based on her art song, Jeune fille et jeune fleur, Op.1, No.4, in which a father laments as he buries his young daughter. The following Scherzo is based in its entirety on a second Beach song, Empress of Night, Op.2, No.3, on a poem by her husband, and dedicated to her mother. The song's accompaniment is the source of the piano's perpetuum mobile, which all but overwhelms the orchestra's presentation of the song's vocal line. Beach wrote that the third movement, Largo, is a "dark tragic lament". It is composed out of her song, Twilight, Op.2, No.1, dedicated to her husband, who wrote the poem. It describes dusk giving way to darkness, and equates day with life, night with death. The movement is relatively short, and leads directly to the finale. Marked Allegro con scioltezza, the joyous last movement is dominated by the piano's brilliance, but pauses briefly to recall the previous movement's tragic theme.

The Symphony in E Minor (Gaelic), Op.32, was composed between 1894 and 1896, and is scored for pairs of flutes, oboes (English horn), clarinets (bass clarinet), and bassoons, four horns, two trumpets, three trombones, tuba, timpani, percussion, and strings. It was dedicated to Emil Paur, conductor of the Boston Symphony Orchestra, and was first performed on 30th October 1896 by the Boston orchestra, which repeated it four times. The score was published by Schmidt in 1897. During Beach's life-time the symphony was given by the Chicago, Philadelphia, Detroit, Hamburg, and Leipzig orchestras, among others.

1n 1889, Amy Beach tried her newly-won skills as an orchestrator on her Mass in E flat, given in 1892 by the Boston Handel and Haydn Society. While the Mass made her famous, only a symphony would establish her as a composer. Events of the following year propelled her into its composition.

The issue of American musical nationalism was raised in 1893 by Antonín Dvorÿák, who had come from Bohemia to direct the National Conservatory of Music in New York. His advocacy of African and Native American traditional songs as sources for concert music was challenged by Beach, who suggested that American composers choose traditional music from their own heritage. Her forebears being from the British Isles, she chose, after hearing the Boston première of Dvorÿák's Symphony "From the New World", four traditional Irish tunes of "simple, rugged and unpretentious beauty" as themes for her symphony. The original themes she composed "in the same idiom and spirit".

Beach's song, Dark is the Night, Op.11, No.1, about a turbulent sea voyage, provides much of the first movement's music, the buzzing introduction, the first two themes, and the development section. The closing theme of the exposition, however, is an Irish jig. The monothematic second movement begins and ends Andante with a lyrical Irish tune played by solo oboe. The middle section is a scherzo marked Allegro vivace, its theme a variation of the borrowed melody. Beach wrote that the third movement, Lento con molta espressione, conveys "the laments... romance and... dreams" of the Irish people. In two sections, each has an Irish melody as theme. The entire fourth movement, Allegro di molto, is spun out of two measures from the first movement. Beach writes that it is about the Celtic people, "their sturdy daily life, their passions and battles". The movement opens with a triumphant martial theme. After its development the orchestra slows down for the second theme, marked by expressive leaps characteristic of Irish melodies.
- Adrienne Fried Block

Made in America / Tambor / Concerto for Orchestra