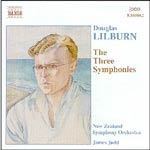 "There's a freshness and enthusiasm in Judd's readings, and he takes care with the music, observing every detail. Throughout all three symphonies there is a greater breadth and warmth of emotion than we've heard before."
- Sunday Star Times (May 2002)

"This disc, although I have (very) slight reservations about the sound (not the performance!), is worth far more than the modest asking price and ought, in a fair world, to do for Lilburn what the same company's discs have done, in the recent past, for composers like Finzi and Bax. His music is just waiting for mass discovery and appreciation and, if you only buy one CD this year, make sure it is this one."
- Classical Music Web

There is enormous interest in this new recording of Douglas Lilburn's Three Symphonies, available for the first time at a low price.

Recorded at the Michael Fowler Centre during May 2001, it features the NZSO under the baton of current Musical Director, James Judd. Arguably New Zealand's most important composer Lilburn's creative talents reached their apogee in the Three Symphonies.

The first and Second are the composer's response to the elevating power of the landscape, whilst the third is an admission that the natural world is beautiful, restorative and necessary, yet also vulnerable and transient.

A must for all interested in N.Z. symphonic music.