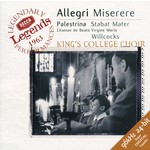 Allegri's Miserere (Psalm 51) is the piece which was jealously guarded by the Papal Choir, until the occasion when Mozart heard it and promptly wrote it out from memory - an astonishing feat, especially for someone of only 14 years of age. This setting is especially remembered for its sensational recurring solo phrases, and there has never been a performance of these solo phrases to match the one in this classic King's recording by the treble, Roy Goodman.

WHAT THE CRITICS HAD TO SAY
"The sensational thing about Allegri's Miserere nowadays is a recurring phrase above the treble stave, which the solo boy brings off with the utmost aplomb. Fabulous is the only word for it."
Gramophone

"The best performance of Palestrina's Stabat Mater I've ever heard ... the beauty and devotional fervour of the rendering as a whole. The trebles sing superbly and David Willcocks's choice of dynamics and the rhythmic movement he gives to the music is entirely to my liking."
Gramophone

Extract from the sleeve notes by Roy Goodman - treble solo on the recording, and now a distinguished conductor and early music specialist

We were not given much technical vocal instruction but simply learnt 'on the job' from the older boys. In the early 1960s we performed David Willcocks' edition of Allegri's Miserere every Ash Wednesday and I was lucky enough to sing the solo part several times. On the day that we made the present recording, I had only just finished playing a rugby match an hour or so before the session. I had no time for a proper shower and still had muddy knees under my long trousers. When I arrived at Chapel the choir was already rehearsing and David Willcocks was trying out several boys for the solo - we were never chosen in advance, to spare us from getting nervous. It seemed that I was on good form, so without any further preparation we started recording the Allegri as the final item on an LP of music for an Ash Wednesday Evensong. I remember a later conversation with Sir David, when I expressed some personal dissatisfaction with some of my solo verses; he kindly told me that he had tried to preserve one complete live performance rather than contrive a 'perfect' edited version, and that if I received a penny every time it was played I would become a millionaire. Sadly there was no contract to that effect - the commercial potential of choristers is clearly a more recent phenomenon!

"Fabulous is the only word for it" (Gramophone)

Allegri: Miserere (with works by Mundy and Palestrina) SPECIAL PRICE