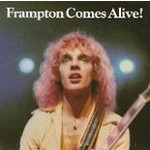 'Frampton Comes Alive!' stands as the cornerstone of Peter Frampton's career, and became the biggest selling live album ever! For Frampton, the album remains a work of special significance. "It still sounds great today. I have always been very proud of it. We took great care in the recording and the mixing and that made it stand out at the time" says Frampton.

"'Frampton Comes Alive!' is much more than a souvenir. It is a testimony to Peter Frampton in his natural habitat."
- Cameron Crowe

Peter Frampton has been revelling in that "two hour event" since he became a professional musician at age 16. Born in Beckenham, England, Peter first became interested in music as a seven-year old, when he discovered his grandmother's banjolele (a banjo-shaped ukulele) in the attic. Teaching himself to play, he became near obsessed, and, upon receiving a guitar from his parents, mastered that as well.

By the age of 10, Frampton was playing in a band called The Little Ravens and played on the same bill at school as George & The Dragons, a group including David Bowie, then a student of Peter's art teacher/ dad, Owen Frampton. In fact, Peter and David would spend time together at lunch breaks, playing Buddy Holly songs. At the age of 11, Peter was playing with a band called The Trubeats, before playing with a band called The Preachers, produced and managed by Bill Wyman, of the Rolling Stones. By 16, Peter had been recruited to be the lead guitarist / singer in The Herd, scoring a handful of British teenybopper hits. Peter was named "The Face 0f 1968" by the UK press - he was well on his way.

By 1969, he had formed Humble Pie with ex-Small Faces singer/guitarist Steve Marriott. Peter was 19 years old. After five albums with Humble Pie, Frampton went solo in 1971, just in time to see 'Rockin' The Fillmore' chase up the US charts. But not regretting his decision to leave, the next five years were a period of writing, recording and touring, as well as guesting on many other artists records ( Nilsson, George Harrison to name two ). Signed to A&M, his first 3 albums were building the foundations of a solid fan base - 'Wind Of Change' in 1971, 'Frampton's Camel' in 1973 ( which featured Peter within a group project ) and 'Somethin's Happening' in 1974. Peter's live work did much to enhance his reputation and eventually the hard work paid off with the release in 1975 of 'Frampton', which gave the world a taste of what was yet to come. The album went to #32 in the US charts, and went gold.

All this culminated in the astonishing success of 'Frampton Comes Alive!', a live album recorded at San Francisco's famed Winterland, and released in 1976. The concert was recorded, and the album went from a single album to a double when one of the record label's bosses, Jerry Moss ( the 'M' in 'A&M' Records ) said "Where's the rest?"! The extra tracks put on to make it a double included Peter's two biggest hits.

The resulting publicity and multi-million-dollar grossing tour made Peter Frampton an international superstar and launched three singles, "Do You Feel Like We Do?", "Baby I Love Your Way" and "Show Me The Way" that exemplify the best of '70s rock, and remain radio play fixtures.

In 1976, Frampton was named Rolling Stone Magazine's "Artist of the Year" and received innumerable industry plaudits for album and concert sales. The album was the biggest selling live album in rock music history, selling an estimated 10 million copies. By the end of 1976, Peter had reportedly earned an estimated gross of $70 million in concert fees and royalties. To date, the album has sold over 16 million copies.