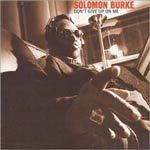 Solomon Burke
Don't Give Up On Me

What's become of soul music? It didn't die with Otis Redding; it didn't stop when Al Green quit; it didn't fade with James Brown's voice--it's been in Los Angeles the entire time, under the astute and faithful stewardship of Solomon Burke.

Burke, the King of Rock & Soul, the Bishop, is a big man with an even bigger talent, a revered vocalist whose mastery is unmatched by any other proponent of the style he largely originated. Burke embodies deep soul, with a forty plus year career that's produced a series of records consistently profound in emotional, artistic and spiritual gravity.

None of these songs have ever been released commercially before now, and Solomon makes each of them his own with his dynamic delivery.