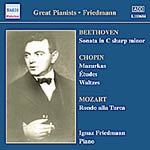 classic pianists from the first half of the twentieth century

Josef Hofmann, Leopold Godowsky, Moriz Rosenthal, Sergey Rachmaninov, Josef Lhevinne — these are the names of some of the greatest pianists from the first half of the twentieth century. To these must be added the name of Ignaz Friedman, who was born, as was Hofmann, in Podgorze, a suburb of the Polish city of Krakow, in 1882. His father was a musician who played in a local theatre orchestra and after piano lessons with a local teacher Flora Grzywinska, Friedman left Krakow in 1900 to study composition at the Leipzig Conservatory with Hugo Riemann. It was not until 1901, when he was already nineteen, that he decided to go to Vienna for lessons with Theodore Leschetizky. As with Moiseiwitsch, Leschetizky was not enthusiastic when the young Friedman presented himself, but after three years of study (also becoming Leschetizky's teaching assistant), Friedman was ready to make his Vienna début in November 1904. He played the D minor Concerto of Brahms, Tchaikovsky's First Concerto and the E flat Concerto of Liszt. This début launched a touring career that began in 1905, and for the next forty years Friedman seemed to be perpetually on tour; he visited the United States twelve times, South America seven times, and Europe every year, as well as Iceland, Turkey, Egypt, South Africa, Palestine, Japan, Australia and New Zealand. Although he did not often perform chamber music in public, he collaborated with the greatest instrumentalists of the day, Casals, Huberman, Feuermann, Morini, Elman, Auer and Ysaÿe, and performed under the batons of Dorati, Gabrilowitsch, Mengelberg and Nikisch.

Until 1914 Friedman lived in Berlin but after the First World War he settled in Copenhagen. Friedman's first visit to America was in 1920 and in April 1923 he made his first records for the American Columbia company. All four titles were rejected and after returning to the studio on 29th December 1923 he again recorded Hark, Hark, the Lark which was subsequently released as his first recording. On this recording made at the end of the acoustic era the sound is remarkably good. The high notes of the piano, often inaudible during this period, have been caught with uncommon fidelity as has Friedman's tone and huge variety of touch.

Fortunately, the height of Friedman's career coincided with the introduction of electrical recording and after making a few more acoustic titles, in November 1925 he made his first electrical discs for Columbia, this time in London, for during the mid-1920s Friedman was regularly giving recitals there at such varied venues as the Wigmore Hall, Aeolian Hall, Queen's Hall and Albert Hall. He had already given a successful Queen's Hall recital on 1st March 1925 and a favourable and perceptive report of it must have prepared the British public for Friedman's records.

"Mr. Friedman played, at the Queen's Hall on Monday, Brahms' Variations on a theme of Handel, Chopin's B minor Sonata, and four pieces of Liszt. We have spoken before of his amazing rapidity in passages of great difficulty and complexity. That is as impressive as ever, and there is even added to it something of the showman's art, enough to round it off, but not enough to detract from its inherent value. But he added on Monday in the Brahms a steadiness and wholeness of view which built up the variations before us in a masterly way. The tempi were by no means usual, and one did not feel that he would necessarily have played them the same way a second time, but he made them, then and there, sound right and inevitable. The fugue was finely conceived, and it stood out not only as the fitting close to that work, but as one of the great fugues of the world; and one has not always been made to feel that." The writer goes on to describe 'finger-work'. "The fingers are like those steam-hammers that can crack nuts; and that can be said of few players nowadays, now that attention has been concentrated rather on the arm. But when the fingers are all at absolute command, as Mr. Friedman's are, it begins to be possible to make the texture of the simplest as well as the most intricate passages thoroughly alive." Finally, discussing inner parts he says "…but Mr. Friedman can taper them or drive them monotonously through as he pleases, or make one melody increase and another decrease. This does not prevent his striking a crashing blow with arm and wrist together when the time comes, and there was a moment (in the minor variation in canon) when he seemed to be running through the tone of his piano and out the other side. But it does make everything that occurs between these crises full of meaning."

Some of Friedman's records now stand as landmarks of recorded pianism, particularly the E flat Nocturne of Chopin (in Volume X) and the disc containing two Chopin Etudes recorded in February 1926. Horowitz spoke enthusiastically of the recording of Op.10, No.7, as "matchless" whilst the performance of the famous 'Revolutionary' study is quite extraordinary in its power and drive, partly created by the dynamic sweep of the left hand as it rises and falls. Another outstanding disc in Friedman's discography is his recording of La Campanella in the arrangement by Busoni (the reason for the abrupt ending is that the disc was full and there was no more room for the final few bars). His peerless technique is shown to great effect here as he imbues it with red-blooded romantic drama, pushing the boundaries of dynamics and tempo so that one feels anything might happen, perhaps sometimes tending to sound somewhat cavalier. The reviewer above noted this as "something of the showman's art" and this characteristic of his playing is quite in opposition to fellow Leschetizky pupil Moiseiwitsch who was always reserved and controlled. Friedman would project or 'play out' to the audience but never to the gallery. A good example of this is his first recording of Chopin's A flat Ballade, delivered with a volcanic consuming romanticism, yet he could play with a beautiful simplicity and poetry as he does in the Waltz in A minor of Chopin. A word about the Mozart and Scarlatti recordings from 1926: the sound, somewhere between a harpsichord and piano, was apparently deliberately effected by placing strips of wood in the piano over the strings.

After extensive and exhaustive touring, the onset of the Second World War meant Friedman had to move again, as Scandinavia was not a safe home for him. The Australian Broadcasting Commission invited him for a tour and during the early 1940s he played and broadcast regularly in Australia and New Zealand. Partial paralysis of his left hand made him retire in 1943 (he was only just over sixty) and he died in Sydney in January 1948.

This CD, the first volume in a series of his complete recordings, ends with one of Friedman's own compositions. He composed over a hundred works including a Piano Quintet and many works for piano solo. This delightful encore, Elle danse, like his Tabatière à musique is, not surprisingly, perfectly tailored to his style and technique. The effortless, elegant rubato and charm transports one back to a bygone age.
- Jonathan Summers

Hummel At the Opera

Sacred music for the Esterházy family