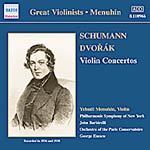 "Rarely performed or recorded, this concerto nonetheless is stirring and evocative of Schumann's broader orchestral writing, and Menuhin's first-rate account (with an especially intense orchestral accompaniment in the first movement) is far more traditional and effective in conception than the more recent "experimental" thoughts offered by Kremer and Harnoncourt on Teldec, with their distended tempos."
- Michael Liebowitz, Classics Today 24 June 2002

The two concertos on this disc, both associated with the Hungarian violinist Joseph Joachim (1831-1907), had troubled births. Robert Schumann was on the verge of mental collapse when he composed his Violin Concerto in D minor in thirteen days in the autumn of 1853. Joachim at first expressed enthusiasm for the work but never played it and eventually agreed with Clara Schumann and their mutual friend Brahms that it should not be published or performed. Antonín Dvorùák, himself an excellent violinist, wrote his Violin Concerto in A minor in the summer of 1879 and at first had his Czech compatriot Karel Halír in mind as its performer. During its composition, however, he visited Berlin to hear the Joachim Quartet play two of his works and consulted Joachim about the concerto. The following year the two men discussed the work and Dvorùák made thorough revisions suggested by Joachim; yet once again the Hungarian never got round to playing the work and it was introduced in 1883 by the leading Czech soloist of the time, Frantísùek Ondrùícùek.

The story of the rediscovery of Schumann's Violin Concerto is an extraordinary one. It resulted in a musical controversy which raged across several continents in the summer of 1937 and turned into a political issue involving the BBC and the Foreign Office in London and the Nazi régime in Berlin. The British-based violinist Jelly d'Aranyi had been seeking the manuscript since 1933, when, she claimed, she had been told of its existence while playing the 'magic glass' game at a séance. Amid the overtones of mumbo-jumbo, the unassailable facts were that the concerto did exist and was in the Prussian State Library in Berlin, to which it had been consigned by Joachim's son Johannes with instructions that it was not to be published until a hundred years after Schumann's death. Some members of the Joachim family, including d'Aranyi, Joseph's great-niece, wanted to hear the concerto performed and naturally d'Aranyi wished to be the one to introduce it. On 6th August it was announced that she would give the première in London in October with the BBC Symphony Orchestra under Sir Adrian Boult. In the meantime a performing edition of the work was being prepared, ostensibly by Georg Schünemann of the Prussian State Library but with covert assistance from Paul Hindemith, who was out of favour with the Nazis. Various opinions were sought as battle lines were drawn up. The 21-year-old Yehudi Menuhin, who was sent a photostat of the manuscript, was enthusiastic, but his former teacher Adolf Busch, the foremost German violinist and a staunch opponent of Hitler's Reich, sided with those who felt that the embargo should be respected, as the work did not represent Schumann at his best. Busch's friend the musicologist Sir Donald Tovey disagreed and, in a long letter published in The Times on 25th September, wrote: 'I assert my positive conviction that the spirit of Schumann is inspiring Jelly d'Aranyi's production of Schumann's posthumous Violin Concerto.' By then the Nazi hierarchy had taken a hand in the affair, deciding, despite appeals on behalf of d'Aranyi by the British, that the première should go not to the Jewish d'Aranyi or Menuhin but to their own top soloist, Georg Kulenkampff. His concert would take place on 19th October, d'Aranyi could air the piece the following day and Menuhin could play it in America on 14th November. Then the Germans postponed their event by more than a month, causing knock-on postponements for the others. On 23rd November Kulenkampff wrote somewhat arrogantly to his violinist colleague Carl Flesch: 'I have adapted the violin part, as has Hindemith. Both pretty similar - I am playing bits of each. In my opinion the original score is, in its unadapted state, impossible! How happy Schumann himself would have been with changes for which he had vainly asked Joachim several times'.

This mangled version, with cuts in the orchestral tuttis, was duly performed by Kulenkampff at the Charlottenburg Opera House in Berlin on 26th November, with Karl Böhm conducting the Philharmonic, and was subsequently recorded, with Hans Schmidt-Isserstedt replacing Böhm. The première, broadcast world-wide, was made into a Nazi propaganda junket, with Hitler present, as it coincided with the annual conferences of the Reichskulturkammer and the Kraft durch Freude (Strength through Joy) movement. 'Indescribable enthusiasm greeted the beautiful performance of the work,' reported the critic H.H. Stuckenschmidt. It was left to Menuhin to unveil Schumann's original score. After playing the concerto with piano accompaniment in Carnegie Hall, New York, on 5th December, he gave the United States orchestral première with the St Louis Symphony under Vladimir Golschmann on 23rd December. The following February he made the recording which is reproduced on this compact disc. Jelly d'Aranyi, who used her own recension of the concerto, had to be content with the British première on 16th February 1938; but according to the violinist Peter Rybar her performance at Queen's Hall, with Boult and the BBC Symphony Orchestra, as originally announced, was eclipsed by Menuhin's with the London Philharmonic at the Royal Albert Hall three weeks later. 'It was so inelegant as Jelly played it but so fine as Menuhin did it,' said Rybar, who recalled that Menuhin also played the Brahms and Mendelssohn concertos in his marathon concert on 6th March, conducted by Sir Henry Wood.

Neither Dvorùák nor Schumann was to feature much in Menuhin's concert programmes or his recording schedule in future years; and of all the concertos he recorded during his 'prodigy decade' of the 1930s, these two were the only ones he never remade. In the case of the Dvorák, it must be admitted that neither he nor his teacher George Enescu, who conducts rather weakly, bring anything special to the music. The composer's rhythms are smoothed out, to the detriment of the character of the work, and although Menuhin makes a lovely sound, so that his admirers will be glad to have the performance, he hardly seems in sympathy with the music. One hears much more of the work's vigour in a live 1944 recording by Busch; and then there are the celebrated studio recordings by the Czech violinists Vásùa Prùíhoda (1943) and Josef Suk (1960). The Schumann performance is a different matter. Perhaps through a feeling of evangelism for this stepchild of the most romantic of German composers, Menuhin and the New York Philharmonic-Symphony Orchestra's chief conductor John Barbirolli bring a glowing commitment to every bar of the D minor Concerto. The beautiful slow movement, featuring one of Schumann's loveliest themes, has never been more persuasively played. The playing of the orchestra is excellent in every department and all in all, this is the finest of all Menuhin's pre-war concerto recordings, and if his enthusiasm for the Schumann later cooled, he had no need to revisit it, having left us such a fine document of his brief love affair with it.
- Tully Potter

The Best of Tchaikovsky Volume 1

The Best of Ravel