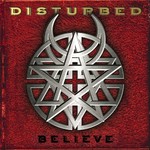 The Chicago metal quartet deliver more of everything that made debut album 'The Sickness' such a phenomenon - more melodic, more intense, more metal, even more powerful.

'Believe' is more of everything that made Chicago metal quartet Disturbed's debut album 'The Sickness' such a phenomenon - more melodic, more intense, more metal, even more powerful. Another killer album from Disturbed.

"From the moment the jagged riffing of "Prayer" begins to pour out of the speakers, one thing is quite clear: Disturbed has learned to cut the fat. Their first record was a massively heavy affair, but at times the music was mired in somewhat needless passages. But on Believe, Disturbed takes the sort of jump that their heroes in Soundgarden and Pantera made after their respective breakthrough records. No longer depending on the choppy tempos and percussion-based riffing of the past, guitarist Dan Donegan has made great strides in expanding their sound to include more varied guitar work all around. Take the title track, which moves from a brutal chug to a sweeping chorus that suddenly stops in its tracks and turns into a winding riff that recalls the work of vintage James Hetfield. It's great stuff, the kind of audible theatrics that makes good heavy metal so visceral and potent. Draiman makes an appreciated and notable effort to stretch his vocal boundaries as well, and his performance is one of the most improved of the band. His clear wail is a more emotive vessel this time, while his gravel-throated bark still adds the trademark harsh element to the sound. All of this adds up to a deeply melodic, at times even beautiful treatment of the genre; the kind of record that makes a metalhead proud to be a metalhead. Highlights include the epic and slightly tragic "Remember," Draiman's savage yammering on "Liberate," the dynamic flip-flopping between razor-sharp aggression and spiritual contemplation on "Rise," and the understated power ballad "Darkness." Certain songs do sound a bit too much like other bands for their own good, but this is out of hero worship more than a lack of originality and doesn't affect anything significantly. In the end, Believe is a satisfying slab of aggression from front to back, filled with enough muscle and brains to render the minor faults irrelevant. Where many of the bands that came out at the same time have proved to be one-album wonders, Believe is proof positive that Disturbed is a force of metal that's here to stay."
- All Music Guide