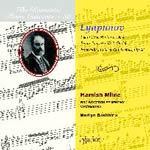 These three works, all written in the ten years either side of 1900, are typical of the Russian nationalist school (Lyapunov was a pupil and disciple of Balakirev) with their colourful orchestration and often folk-inspired melodies. The other great hero in Lyapunov's life was Liszt and both the concertos are in a single multisectional movement as pioneered by the Hungarian. Their virtuosity too is Lisztian and there are many cadenza-like passages akin to those found in that master's concertos.

This is the premiere recording of the first concerto.

Who better to play these pieces than Hamish Milne, who has made a speciality of Russian music (he has made many Medtner recordings and his Hyperion recording of Alexandrov has just been exceptionally well received), and the ever excellent BBCSSO consducted by Martyn Brabbins (who also has impeccable Russian credentials - he studied conducting in Leningrad!).