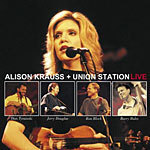 "Probably the most accomplished bluegrass players around today, this group finally sprang to mega-fame on the "Oh Brother" tide of success. This is a 2CD set that has me riveted, not only because Alison has one of the sweetest voices around, but also for her stunning, professional band. With drums, bass, fiddle, mandolin, dobro (courtesy of the wicked Jerry Douglas) and three part harmonies, this is one of the best all-round live performances you could want - close your eyes and you are there."
- Roger Marbeck

The double set, recorded on their spring 2002 tour, includes versions of classic Alison Krauss + Union Station songs such as "When You Say Nothing At All" and "Baby, Now That I've Found You" from the double Platinum 'Baby, Now That I've Found You' album, "The Lucky One" and "Let Me Touch You For Awhile" from the 2001 gold-selling 'New Favourite', plus "I Am a Man of Constant Sorrow" and "Down to the River to Pray" from the 'O Brother, Where Art Thou?' soundtrack. Also included are 2 brand new songs.

Down The Old Plank Road: The Nashville Sessions

The Girl In The Other Room