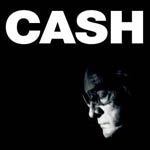 The Man in Black performs songs that span many eras/styles.

Johnny Cash living legend and songwriting extraordinaire brings you The Man Comes Around, his fourth collaboration with producer Rick Rubin, stacks up next to its Grammy-winning predecessors.

Once again the singer, the producer, and their friends and families all contributed dozens of ideas for songs to record; the fifteen selections that ultimately made the final cut represent one of the most surprising albums in the storied, nearly five-decade-long career of this legend in American music.

From Nine Inch Nails' Hurt to Hank Williams's I'm So Lonesome I Could Cry, it would be hard to come up with a collection of songs that spanned more eras and styles. The guests who appear on the album - including Don Henley, Fiona Apple, and Nick Cave - only add to the sense of this project's range.