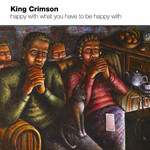 King Crimson
Happy With What You Have To Be Happy With

This mini-album introduces momentous tracks from the 'The Power to Believe' album (produced by Machine), samples classic Crimson material, and is craftily fastened together with haunting haikus.

'Happy With What You Have To Be Happy With' is King Crimson's mini-album from 2002 - which is a lesson in how to be shaken, stirred and stunned all in one sitting.

Featuring mostly short tracks the mini-album is more song-centred and acted as an appetizer for 'The Power to Believe' (2003) in much the same way that the mini-album 'Vrooom' preceded and anticipated 'Thrak' in the mid 1990s.

Following their sell-out tour with Tool in 2001, the band were busy in the studio recapturing the clamour and the calm, and writing new material for next album). 'Happy... ' introduced two momentous new tracks from the forthcoming album (produced by Machine), samples classic Crimson material, and is craftily fastened together with haunting haikus. There is also a hidden track to further intrigue Crimson devotees.

Re-released by DGM, fans and new listeners are guaranteed to be Happy With...

One Size Fits All