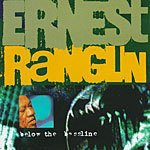 Ernest Ranglin
Below The Bassline

With pianist Monty Alexander - perfectly arranged, executed and produced, adding new dimensions to the worlds of reggae and jazz.

"The legendary Ernest Ranglin has been playing guitar for over 60 years - and his music still sounds fresh and exciting today. A fine example of his remarkable talents on record is this stunning album, 'Below the Bassline', on which he and long-time friend / pianist Monty Alexander perform a collection of original numbers and classic Jamaican songs in their unique reggae / jazz style.

'Below the Bassline' is a perfectly arranged, executed and produced album, adding new dimensions to the worlds of reggae and jazz."
- GEOFF (2nd April 2005)

BIOGRAPHY:
A leading force responsible for the rise of Caribbean music, guitar virtuoso Ernest Ranglin was born June 19, 1932 and grew up in the small town of Robin's Hall in the Parish of Manchester, a rural community in the middle of Jamaica. Music has always claimed a special place in the island's culture, and Ranglin's destiny was set from an early age when two of his uncles showed him the rudiments of playing the guitar. When they discovered just how good the young boy was, they bought him a ukulele. He soon graduated to guitar, dedicating most of his time and energy into mastering the instrument, learning from guitar books and late-night sessions watching the Jamaican dance bands of the time. By the time he was sixteen years old, Ranglin was acknowledged as the rising young talent in the city. His reputation came to the attention of rival dance bands and, by the early-Fifties, he was a member of Jamaica's best-known group, the Eric Deans Orchestra. He toured often with them and other acts around the Caribbean and the Bahamas, often alongside young pianist, Monty Alexander. The big bands gave Ranglin the hugely beneficial experience of learning how to orchestrate and arrange, whilst the constant tours allowed him to meet musicians from other traditions, broadening his musical vision.

It was, however, back in Jamaica that his career was to be transformed by a chance meeting. In 1958 Ranglin was leading his own quintet, playing the leading hotels in Kingston and the resorts on the north of the island. One engagement was at the Half Moon Hotel in Montego Bay, a show caught by a young would-be record producer called Chris Blackwell. Immediately impressed by Ranglin's extraordinary talents, Blackwell offered him the chance to make a record. The album featured a pianist called Lance Heywood on one side with Ernest Ranglin on the other: it was the very first release by Island Records and the start of a long association between Ranglin and Blackwell.

By the following year, 1959, Ranglin had joined the bassist Cluett Johnson in a studio group called Clue J & His Blues Blasters. This was a very different kind of style to the big bands. Jamaican music was in a state of flux, the traditional mento superseded by a tough urban stance influenced by the pervading sounds of American R&B. Johnson and Ranglin recorded several instrumentals for producer Clement 'Coxsone' Dodd at Federal, the only real studio facility on the island. The first of these tunes, Shuffling Bug, is widely regarded as the first example of ska, the shuffle rhythm that exaggerated the 'jump beat' heard on New Orleans' R&B records of the Fifties. Ska became the bedrock of Jamaican popular music, leading to rock steady, reggae, ragga and all the innovations the island has brought into the global mainstream.

Ranglin's fluent and versatile guitar style, coupled with his arrangement skills, meant he was in constant demand right through the ska era. In addition to his work with Prince Buster and Baba Brooks, Ranglin backed a young Jamaican singer called Millie for a single in 1964 on Blackwell's Island label. "My Boy Lollipop" reached number two in the UK chart and went on to become a worldwide hit - the first time ska had infiltrated into the vocabulary of pop music.

In London he was in the resident band at Ronnie Scott's jazz club for nine months and continued session work and arranging for legendary performers, such as the Melodians and The Wailers'. Ranglin laid the groundwork for the popular rockers reggae style and toured extensively with Jimmy Cliff. In 1973 he was awarded the Order of Distinction from the Jamaican Government for his contributions to music, and continued touring and recording regularly throughout the decades to follow. In the 1990s Ranglin released a string of excellent albums - 'Below The Bassline', 'Memories Of Barber Mack' and 'In Search of the Lost Riddim'.