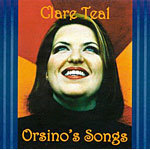 A terrific range of styles and moods, natural and unforced vocals, unreservedly recommended

"Clare Teal has a terrific range of styles and moods... her vocals are natural and unforced... unreservedly recommended"
- The Times (5 stars)

"Apart from her obvious talents as a vocalist, Clare Teal writes songs so attractive that they already sound like well loved standards."
- Dave Gelly (The Observer)

Since being signed to Candid Records in 2001 Clare Teal has proved to be without a doubt, one of the most talented newcomers to hit the Jazz scene in years. Not only a wonderfully gifted singer, but also a very promising, melodic, intuitive and witty writer who's own songs are already being heralded as standards.

Orsino's Songs is Clare's eagerly awaited second album on Candid Records - the content of which is even richer and exudes more warmth than ever. Again Clare is accompanied by her regular band made up of the UK's top mainstream musicians, Martin Litton on Piano; Trevor Whiting on Reeds; Nils Solberg on Guitar, John Day on Bass and Rod Brown on Drums. As well as three very special guests Alan Barnes, Ian Shaw + Malcolm Earl Smith. Martin Litton has excelled himself with the arrangements for this selection of well-known classics and originals. He, like Clare, knows how to reach into the very core of a song and his arrangements display a whole variety of styles and emotions. Clare puts the success of this harmonious and creative partnership down to the fact that both she and Martin share a birthday and are obviously linked by the 17th moon of Uranus!

Orsino's Songs really says it all about Clare. The quality of the performance you on this CD is replicated at every one of her concerts and roadshows. The album is a complete experience from start to finish encompassing all the many facets of her unique talents. It's all there the originality, exuberance, pathos, tenderness and wit. For Clare, like Shakespeare's Orsino, "music is the food of love" and Orsino surely would have approved of this wide-ranging collection of songs carefully tailored to satisfy our musical appetites.

California Dreaming, the lead track is an cool, laid back version of the Mamas and Papas classic which lends itself perfectly to the intimate side of the Teal vocal art and dig the gorgeous clarinet solo by the richly talented Alan Barnes. Clare's four cleverly crafted originals are reflective (Life Plans), hip (Let's Not Take a Raincheck), yearning (Ready for Love to Begin) and carefree (Who Bought The Car?). Clare breathes new life into swinging standards like I Only Have Eyes For You and You Make Me Feel So Young and holds us enchanted with her poignant renditions of I Loves You Porgy and In the Still of the Night.

Says Clare "The making of this album was a delight. We recorded at Blah Street Studios where Robbie Williams & Kylie Minogue recorded some of there big hit singles - in an old oast house, which just oozes character and charm. My vocals were recorded using genuine 1930's and 1940's microphones, an experience in itself.