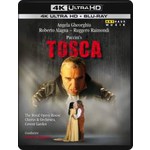 Tosca - the epitome of Italian opera. It is a thrilling story about desire, passion and death. A story about one beloved woman and two men, who fight a duel - one of them is an angel and the other one a demon. Benoît Jacquot, the successful French film director, does not create a stage performance but an opera for the cinema in 2001. A bold idea and an exciting venture - he loves his actors, the close-up shots and he has developed his own style as it turned out in many other of his films before. The result is a wonderful production of one of Puccini's greatest operas with an amazing set design, beautiful costumes and an emotional performance by Angela Gheorghiu and Roberto Alagna, the opera dream couple at that time, in the main roles and Ruggero Raimondi as counterpart.