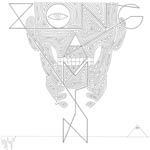 Zongamin's new album is both immediate and devastating. Where 90% of dance music is created on computers by people who can't play any instruments, here is someone crafting something sonically adventurous and soul stirring with a bedroom full of musical tools and a singular outlook. Zongamin plays the bass, drums, guitar and percussion; blurring ESG's punk-funk elasticity and catching the attention of a varied selection of DJs (Andy Weatherall, FC Kahuna, Soulwax). It shines above the rest.

So what and who is Zongamin? He's Japanese born Susumu Mukai incognito and Zongamin can be one of many things (for example, as a live entity it's a five piece rock band). It would be easy to merely class him as a maverick but there's no hiding from the fact that he does things differently. It all started when he found his first bass guitar lying in a skip and he rebuilt it in woodwork class, setting a precedent for all his future music, allowing him to stamp his mark all over the Zongamin sound.

This album has been worth the two-year wait since his first release. From the dramatic opening of the Arrows cover, "Make Love Not War", to the haunted crypt closer, "Mummies", Zongamin mixes a peculiar brand of rock 'n' roll and dance music. Trace elements include Siouxsie & The Banshees, Miles Davis, Prince, The Tornadoes, Bowie, Joy Division, The Cramps, Vincent Price era horror movies and a unique sense of humour. All bound together with an unfailing knack for tuneful passion. "It's mostly song free but I think this a pop music album, " Susumu concludes. "Or at least pop music as I like it to sound."

"Beneath the churning, polluted waters of the pop ocean, something is stirring. Fed by years of contaminated musical sludge and pop culture slurry, Zongamin is ready to emerge. With a mighty roar the Japanese monster breaks the waves, rears up and crushes other bands like the puny fishing vessels they are." Justin Quirk, i-D Magazine