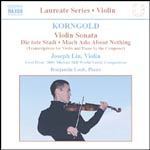 "Excellent virtuosic and expressive performances of some of Korngold's most enchanting music."
Recording of the Month. (MusicWeb June 2004)

"Violinist Joseph Lin won the inaugural Michael Hill Competition in 2001 and this Naxos recording was one of his "rewards". It's a reward too for those who find themselves intrigued by the twilight years of German Romanticism; Korngold's 1912 Violin Sonata out-Strausses Strauss in its juicy chromaticisms and surging climaxes, with a slow movement that hints at many Warner Bros themes to come. Some players might have dipped into a lusher palette for these works, but Lin and pianist Benjamin Loeb keep it sleek and lean, which means that a short piece like Caprice Fantastique has no trouble living up to its title."
William Dart (NZ Herald)

"Excellent virtuosic and expressive performances of some of Korngold's most enchanting music."
Recording of the Month. (MusicWeb June 2004)

The young violinists Joseph Lin has earned broad recognition for his mature artistry. In 1996 he was awarded First Prize at the Concert Artists Guild Competition and was named Presidential Scholar in the Arts of the same year. In 1999, he received the Pro Musicis International Award, the youngest musician to be chosen for the award since its inception. This was followed by a top prize at the 2000 Hanover International Violin Competition, and in 2001 by the First Prize at the inaugural 2001 Michael Hill World Violin Competition in New Zealand. An active chamber musician, he has performed regularly at the Marlboro festival, and tours extensively with Musicians from Marlboro.