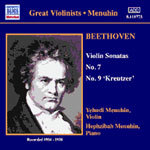 Good duo playing depends on an intuitive understanding between the partners, which comes only after intensive study together. Of course it helps if the two musicians live in the same house and can work whenever they feel like it.

That was the situation with the violin prodigy Yehudi Menuhin and his piano-playing younger sister Hephzibah: he acted as both partner and coach, passing on to her the knowledge he had gained from his own teachers Louis Persinger, George Enescu and Adolf Busch. 'Gradually, almost surreptitiously and without really noticing what we were doing, Hephzibah and I had started to play together at home,' Yehudi wrote. 'It wasn't a deliberate decision but simply a natural extension of our relations as brother and sister: the partnership came about without our having to make it happen.' When the two first played in public, he was eighteen and she was fourteen. Their partnership would endure, with various enforced separations, until her death.


Hephzibah Menuhin was born in San Francisco on 20th May 1920 and made her début there in 1928. Among her teachers were Adolf Busch's sonata partner Rudolf Serkin in Basel and Marcel Ciampi in Paris. She started playing sonatas with Yehudi in the recording studio in September 1933 and first appeared with him in public at the Salle Pleyel in Paris on 13th October 1934. For a time following her first marriage in 1938 she lived in Australia, but after the Second World War she settled in London, where she remarried. A woman of firm principles, she was known to open her house to vagrants and other down-and-outs. As a musician she was happiest in Mozart, although she covered a wide repertoire. Her recordings include Schubert's 'Trout' Quintet with members of the Amadeus Quartet, Mozart concertos with her brother conducting, trios with Yehudi and Maurice Gendron - their collaboration lasted 25 years - and sonatas with Yehudi, among which should be mentioned those by Bartók, Enescu and Franck. She died in London on New Year's Day 1981 after a long illness. Her brother wrote of her: 'Such was Hephzibah's sensitivity that she did not need many words. She was an extraordinary instrument, almost an extension of myself'.


Born in New York on 22nd April 1916, Yehudi Menuhin died in Berlin on 12th March 1999. Between those dates he metamorphosed from the child of obscure Russian immigrants into Baron Menuhin of Stoke d'Abernon, perhaps the best-known musician in the world and a sort of international statesman. He was brought up initially in San Francisco and after two years of lessons with Siegmund Anker, began studies with Persinger in 1923. Two years later he gave his first full solo recital. Then, in 1926, came his New York début, his concerto début in San Francisco and his first trip to Europe, where he studied in Paris with Enescu apart from two summers in Basel with Busch. From 1931 the family, who lived off Yehudi's earnings, established their home near Paris, and the following year the boy recorded Elgar's Violin Concerto under the composer's direction. After a world tour in 1935 he took an eighteen-month sabbatical and then entered on a disastrous first marriage: his parents had not prepared him for real life. Many wartime concerts and a 1945 tour of the German death camps with Benjamin Britten were followed by a successful second marriage and a career lived in the limelight. In due course he took up conducting, making numerous recordings in that rôle, and although he never had much time available for teaching, he founded schools in England and Switzerland. The public, nevertheless, continued to associate him with the violin, even when he had given up playing it, and much of Menuhin's later life was spent trying to reconcile his increasing musical mastery with his diminishing control over his instrument.


The most famous and virtuosic of Beethoven's violin sonatas is the 'Kreutzer', and Yehudi Menuhin began learning it with Persinger as early as 1928. So it was understandable that he and Hephzibah learnt it for their first recital - also on the programme were the Mozart A major, K526, and Schumann D minor sonatas, both of which they had already recorded for HMV. The 'Kreutzer' was documented a month later at EMI's Abbey Road Studios in London. It is a limber, athletic, songful performance of great freshness, as you might expect from teenagers. More than twenty years later the two re-recorded the sonata, at sessions separated by more than a year, and inevitably by then their interpretation had deepened, at the cost of some of the spontaneity of this early version. The other Beethoven sonata here, the Sonata in C minor, is the most darkly intense of the set, with a profound slow movement. By the time the young Menuhins brought it into the studio, their duo was well established, and there is a palpable feeling of greater assurance in the performance, especially in Hephzibah's playing. Here again there is a later recording by the pair, in which we find more of Beethoven's ruggedness but less impishness in the marvellous little Scherzo. The Rondo in G was recorded as a filler for the 78rpm set of this sonata. Our recital ends with one of two works which Schubert wrote for the Bohemian virtuoso Josef Slavík, and which are therefore more demanding technically than his violin sonatas (the other one is the Fantasy in C on the song 'Sei mir gegrüsst'). The Menuhins recorded this Rondo brillant only once. Brother and sister have great fun with the piece, which was a favourite with Busch and Serkin - those who like to compare teachers with pupils will find recordings of everything here, except the Rondo in G, by the Busch/Serkin Duo. Unfortunately we have no records of Enescu playing Beethoven or Schubert sonatas.
- Tully Potter