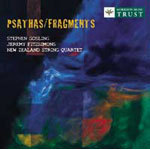 A leading figure amongst the younger generation of New Zealand composers, John Psathas was engaged to arrange and compose music for the opening and closing ceremonies at 2004 Athens Olympics. The most prestigious engagement of his career to date, Psathas's music is now reaching a huge global audience.

'Fragments' is an inspirational piece of chamber music that has received widespread acclaim. An astounding example of Psathas's unique and distinctive compositions Fragments is highly recommended.

"John Psathas' new CD has been given the lounge test, the earphones test and the inevitable car stereo test and, predictably, it's come up trumps.

The Wellington composer has quite a track record, having written concertos for Evelyn Glennie and Michael Brecker to play in England and Italy respectively. Back home, Psathas' first album, Pulse, carried off the Classical CD of the Year Award for 1999.

Fragments takes its title from its two framing tracks, the first of which, with gentle vibes and a piano that's part-Debussy, part-Chick Corea, is a nocturne waiting for Lee Konitz's sax to drift into its domain. It's the perfect moody introduction for the joyous sparring of Stephen Gosling and Jeremy Fitzsimons in Happy Tachyons. Next up is Psathas' Piano Quintet, which was premiered at the 2000 Wellington International Festival. This new recording with Gosling and the New Zealand String Quartet has the potential to stun. While the first movement occasionally runs on parallel tracks to Steve Reich's Different Trains, the second is a dazzling transcription of Greek violinist Stathis Koukoularis in improv mode. This, the most daring track, might represent outer limits for the more cautious listener, with its wild, unbridled middle section, and pizzicati that almost sound as if they could inflict bodily harm.

On paper, Jettatura threatens OOS, but the New York-based Gosling makes it all throwaway brilliance. He makes the mesmerisingly complex textures into clouds glanced down at from a higher serenity. Motifs chime through, and engineer Steve Garden catches them all.

Matre's Dance is recorded for the first time with the stipulated percussion and the piano now has the cavernous boom of timpani at its side. Gosling and Fitzsimons seem superhumanly gifted but they're not; the 9m 37s were recorded in short bursts to ensure its terrifying intensity. Ultimately, the music of Psathas is unclassifiable. His audiences (and awards) come from the contemporary classical camp, but jazz and rock enthusiasts could easily get hooked. Fragments would certainly jolt a few electronica buffs in their ambient cocoons and make them realise just what exciting sounds piano, drums and strings can make."
- William Dart (NZ Herald)