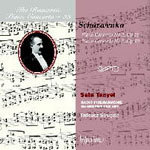 'an admirable addition to an admirable series. The recordings retain their original excellence and Tadeusz Strugula and the German orchestra back their stylish soloist to the hilt' (Gramophone)

'there is a meaty flamboyance to both these concertos, giving them a personality of their own. Seta Tanyel brings to them an impressive strength of purpose and a rhapsodic lyrical spirit that project the music with appealing panache' (Daily Telegraph)

Continuing her inspiring series of discs exploring the solo piano repertory of the Polish Romantic, Xaver Scharwenka, Seta Tanyel here turns her attention to two of his four piano concertos. These unashamedly appealing works should by no means be judged by their relative unfamiliarty; they are among the most impressive of all the neglected concertos championed in our series, as Stephen Hough's Gramophone Award winning recording of the 4th concerto (CDA66790) has shown. In the capable hands of Tanyel, the 2nd and 3rd concertos are rich with the harmonic poise of Schumann, the melodic coquettishness of Chopin and even the passion of Rachmaninov; a disc as enlightening as it is thrilling.

Although previously issued on Collins Classics, this recording was one of the last issued before the demise of the label, and did not therefore benefit from a wide circulation. We are delighted to reissue it in our Romantic Piano Concerto series where it will surely gain the recognition it deserves.