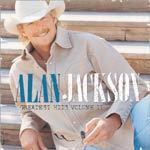 More smash songs by the Country star. Alan Jackson has been recognised by Billboard magazine as country music's #1 most influential recording artist.

Alan Jackson has been recognised by Billboard magazine as country music's #1 most influential recording artist. And now comes the release of this CD set - his second Greatest Hits Collection.

Some of the blockbuster hits featured here include "Little Bitty", "I'll Go On Loving You", "Right On The Money", "The Blues Man", "Where I Come From" and of course the internationally critically acclaimed track "Where Were You (When The World Stopped Turning)".

Two new tracks have been recorded for this release: "It's 5 O'Clock Somewhere" (a duet with Jimmy Buffett) and a ballad on marriage, "Remember When".