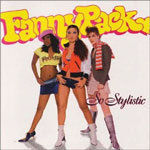 Two guys, three girls from Brooklyn, New York who make ultra fun songs that you can dance to. Includes the hit single "Cameltoe"

Fannypack are two very handsome guys and three real girls from Brooklyn, New York who make ultra fun songs that you can dance to. The songs are real. They are not over done, sappy rantings on topics that real teenagers don't know about. These girls fight and talk shit and sneak out of the house and go to parties and meet boys and dance all night and lord knows what else. This is real. The truth is, most teenage girls are no angels. This is especially true of the soft sweet and maybe even a little dangerous fashionista Fannypack style militia crew.

Fannypack is the mega-fresh marriage of electronic booty bass hip hop flavour and dance hall, dance floor, club music sensibilities. Raised on rap, the Fannypack girls kick a little old school boom bap over modern and future forward electronic booty funk tracks. Fannypack never fails to cold rock the party with their feel good, get up and do it songs.

Produced by legendary New York City nightlife personalities and all around extremely handsome guys Fancy and "Big Black" Matt Goias, the members of Fannypack are as eclectic and far reaching as their music, lives, and travels.

So Stylistic features the single that's got the world in a flap "Cameltoe".