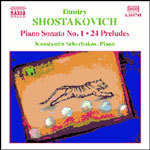 The composer was a prize-winner in the 1927 Chopin Competition in Warsaw and appeared frequently, if often reluctantly, as an exponent of his own piano music and that of others.

When discussing the music of Dmitry Shostakovich, with its focussing on theatrical projects in his earlier years and symphonic works thereafter, it is easy to forget the significance of his piano music as a repository for some of his most abstract and personal ideas. This is not surprising, given that the composer was a prize-winner in the 1927 Chopin Competition in Warsaw and appeared frequently, if often reluctantly, as an exponent of his own piano music and that of others, until restricted by illness in the late 1950s. The present recording features Shostakovich's most important piano works, apart from the monumental cycle of 24 Preludes and Fugues [Naxos 8.554745-6] and the Second Piano Sonata, their often radical tendencies fitting in well with the heady years of artistic experimentation in the Soviet Union, before the cultural clampdown, with the imposition of the principles of Socialist Realism.

Composed in the spring of 1922, the Fantastic Dances were published four years later, and for the greater part of the composer's life remained the one piece from before his First Symphony in general circulation. Shostakovich himself gave the première in Moscow on 20th March 1925, and performed the pieces on numerous subsequent occasions. His affection is easy to understand as, though they show few of his later stylistic traits, the liveliness of his musical mind is fully in evidence. A mischievous-sounding Allegretto in C major is followed by the insouciant waltz of an Andantino in G major, concluding with the lively polka of a further Allegretto in C major.

The radical tendencies in Shostakovich's music, held in rigorous check by the First Symphony [Naxos 8.550623], erupt uninhibitedly in the First Piano Sonata, composed during September and October 1926. The work was originally subtitled 'October', a description transferred to the Second Symphony [Naxos 8.550624], but whose implied conflict is evident in the sonata's attempts to ground itself in the key of C major. This is apparent at the opening, when, amid a maelstrom of atonal figuration, C major sounds bizarrely against the dissonance. Brusque descending scales focus activity in the bass register, from where intricate contrapuntal passage-work effects a return to the opening material. A Lento section brings the only prolonged calm in the whole work, though its sense of tonal and textural 'floating' does not mean corresponding repose. A running bass line duly leads to a final outburst of seething energy, whose hammered C sharps brutally undermine any attempt at a C major resolution.

Experimentalism of a different sort permeates the Aphorisms, ten recalcitrant miniatures written between 25th February and 7th April 1927. An absence of anything approaching classical poise may have been encouraged by the radical composer and theorist Boleslav Yavorsky, who persuaded Shostakovich to discard the original title of Suite, and to whom the set was subsequently dedicated. As one might expect from the composer at this irony-fuelled juncture, the titles of the individual pieces are not to be taken at face value. Recitative proceeds aimlessly, curtailed by a harsh chord which returns more subtly to punctuate the course of the ensuing Serenade. Few titles would be less appropriate to the capricious character and grating sonorities of the third piece than Nocturne, which tails off in a succession of fragmentary sounds employing the pitches D, E flat, C and B, the D-S-C-H motto of fundamental importance to Shostakovich's later music. The fourth piece, Elegy, is written in the 'white note' key of C major, with F sharps intruding at the close to ruffle the gentle aura; a procedure which, together with mock-solemn fanfares of repeated notes, similarly robs the Funeral March of any gravitas. Étude draws on the familiar parody of a technical exercise, the abnormally slow metronome mark ensuring a pedantic air throughout. Dance of Death makes allusions to the Dies irae chant and open-string pitches amid a welter of activity, while Canon dryly uses the framework of a three-part invention to poke fun at academic strictures. The surreal calm of Legend unfolds at a continual ppp dynamic, before Lullaby rounds off the sequence in a haze of tranquil arabesques over inscrutable bass octaves, ending with a teasingly unresolved chord.

By the time of the 24 Preludes, composed, in the order published, during the winter of 1932-33, the aim to shock has been transmuted into the desire to entertain. This is not to say that these pieces, which follow the same tonal order as Chopin's Op. 28 Preludes, from C major and A minor through to F major and D minor, are conventional in essence; rather the surprises come not from abrupt juxtaposition but from more subtle contrasts between preludes and across the sequence as a whole. So the harmonic piquancy of I is followed by the gangling motion of II and the mainly gentle pathos of III. After the Bachian fluency of IV, the boisterous V cavorts up and down the keyboard, while VI is a spiky study of typically Shostakovichian humour. The placid VII is complemented by the quixotic gait of VIII and hectic rhythmic motion of IX, before X introduces a bittersweet harmonic touch. XI sounds a note of slapstick comedy, while the lyrical XII anticipates ideas in the First Piano Concerto [Naxos 8.553126]. XIII combines a robust theme with a repeated-note bass, in complete contrast with the glowering emotional intensity of XIV. XV lightens the mood with its effervescent high spirits, and XVI has an insouciance more usually associated with Prokofiev, before XVII evinces a rapt poetry which accords well with Chopinesque precedent. XVIII is lively and playful, XIX enchants with its easy-going barcarolle motion, and XX is all energy and confrontation. XXI is a good-natured ramble, while the ruminative emotion of XXII again evokes Chopin. The quicksilver intermezzo of XXIII leads effectively into the clipped humour of XXIV, ending the cycle on a note of appealing understatement.
- Richard Whitehouse