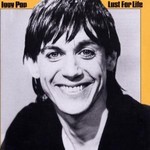 "Along with Detroit's own MC5, The Stooges were a blueprint for all things rock'n'roll. A raw, frequently under-produced live sound was the trademark of both bands when they emerged in the late '60s. What Iggy Pop and his band mates achieved on their first two recordings was fierce, riotous and very exciting - but that's another whole story.

Fast-forward into the mid-'70s and Iggy is ensconced in Berlin with new buddy, David Bowie, who is on a creative high after his 'Low' album. Within the year of 1977, Iggy and Ziggy had recorded the first two of Mr. Pop's "solo" releases. Bowie would write the music, leaving the lyrics to be filled in by the original punk himself. In March 'The Idiot' emerged, with dark synthesized sounds as backdrop for Iggy's inimitable vocal dramatics. Interestingly, two tracks from 'The Idiot' would appear on future Bowie recordings - "Sister Midnight" became "Red Money" on 'Lodger' and "China Girl" was a huge hit for David, during the 'Let's Dance' period.

On September 9th 1977 'Lust for Life' was unleashed on an unsuspecting public and proved to be the most significant album of Iggy's career. Announced by the invigorating, reckless beat of drummer Hunt Sales and thunderous bass of brother Tony, the powerfully riveting title track is a sheer, unbridled celebration of rock. All these years later, "Lust for Life" still sounds threateningly colossal! By now we've all seen that adrenalin-filled chase scene from 'Trainspotting' and this piece provided the perfect soundtrack to the mad screen hedonism.

Up next is "Sixteen" with echo- heavy vocals from Iggy, happily singing about dark desires over the jagged, metallic guitars of Ricky Gardiner and Carlos Alomar. It was Bowie who had selected the musicians for the sessions and he would retain these two players for his own band, while the Hunt brothers / rhythm section would later collaborate with him in Tin Machine. And fair enough too - Bowie took care of all production, keyboards and backing vocals on 'Lust For Life'.

The innuendo-laden "Some Weird Sin" is charged with dangerous vitality and humour and the track "Success" is equally fun to listen to with its hilarious "call and response" vocal chants. Another true highlight is the irresistible upbeat "Passenger", which was later covered by Siouxsie and The Banshees. The simple syncopated rhythm guitar riffs and easy sing-along chorus ("La la la la la la la la la…") make "Passenger" one of the greatest 4/4 songs ever written!

Two more 'Lust for Life' songs were well worthy of Mr. Bowie to re-record in the '80s - the dangerous "Neighborhood Threat" and perfectly pop "Tonight". The closing "Fall in Love With Me" is James Osterberg at his candid best and leaves the listener wanting more - the repeat button can be utilised here.

All in all, this album contains just the right balance of raw Iggy power, melodic hooks, clever songwriting and unique, rock'n'roll attitude. A must have for anyone with a real lust for life!!!"
- GEOFF (6 November 2004)