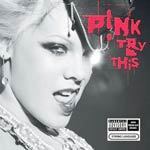 On Pink's first album, she was squarely in the R&B/pop mode, but her follow-up contained the single "Just Like a Pill," a fierce rocker that pointed toward a new direction. Try This moves Pink further into rock territory; where its predecessor contained collaborations with former 4 Non Blondes singer Linda Perry, Try This is dominated by songs co-written with (and produced by) Rancid vocalist Tim Armstrong.

There are a couple of R&B-oriented songs to round things out (not to mention a steamy duet with notoriously nasty female rapper Peaches), but, for the most part, Pink goes Avril Lavigne one better on this album. She manages to mate the punk ethic and modern pop/rock production values with a rawness and immediacy that goes far beyond Lavigne's pop-punk amalgam. To drive her point home, Pink closes the album with an unlisted hidden track that attacks teen-poppers like Britney and Christina with expletive-filled glee.