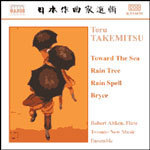 "There are few composers who have carried off the subtle art of fusing cultures in art so successfully as Takemitsu. Some months back Editor's Choice featured an outstanding concertante disc from BIS which seduced with a multi-coloured canvas of sound. Here, at a price that makes exploration virtually mandatory comes a collection of chamber works - the subtlety is quite breathtaking. Hearing some of the these deceptively simple pieces is be convinced of the truth of 'less is more'."
(Editor's Choice Gramophone Magazine Awards Issue 2003)

"Music is either sound or silence. As long as I live I shall choose sound as something to confront a silence. That sound should be a single, strong sound."
- Toru Takemitsu (1962)


Born in Tokyo on 8th October, 1930, Toru Takemitsu was virtually self-taught as a musician. His very few formal lessons were limited to his contact with the composer Yasuji Kiyose. As Takemitsu himself relates it, his musical epiphany occurred in his early teenage years when, while serving as a member of a student relief force in the hinterlands of Japan near the end of the War, he became transfixed by a friend's recording of the famous French chanson, Parlez-moi d'amour. Henceforth, he determined, he would make music his life's work. At the end of the war Takemitsu supported himself by working in the kitchen of an American military base, which provided him free access to a piano in the dining-hall where he could hone his talents.


Takemitsu found himself drawn to the music of those composers who were themselves deeply influenced by the musical and philosophical traditions of Asian culture, notably Claude Debussy, Olivier Messiaen and, later on, John Cage. Through his mentor Kiyose he met his contemporaries Hayasaka and Matsudaira, who informed him about traditional Japanese and Asian music. Between 1950 and 1952 the three of them took part in Kiyose's Shin Sakkyokuha Kyokai (New School of Composers) group, where Takemitsu had his first performances. At these concerts he met the composers Joji Yuasa and Kuniharu Akiyama, and together with several other painters, poets and performers, established a new group, the Jikken Kobo (Experimental Workshop), dedicated to the performance of mixed media works. Takemitsu's contributions to their repertoire included some of the earliest examples of musique concrète, free improvisation, graphic notation and aleatoric music. He began experimenting with two reel-to-reel tape recorders he set up in his kitchen, where he created the music for the film Woman of the Dunes.

Takemitsu came to international attention following the lavish praise Stravinsky expressed upon hearing his Requiem for strings in 1959 during a visit to Japan. This work, dedicated to the memory of his mentor Kiyose, was but the first in a series of sensitive, evocative orchestral works that would establish Takemitsu's international reputation. Many of these scores were championed early on by Seiji Ozawa during his tenure as conductor of the Toronto Symphony in the 1960s. Takemitsu's inimitable integration of east and west, timbre and texture, and sound and silence made him the first Japanese composer to achieve such an international presence. His scores for the films of Akira Kurosawa (including the classics Dodes'kaden, and Ran) brought his music to an even larger audience in the 1970s and 1980s. He enjoyed travelling throughout the world preparing the first performances of his works and discussing his music. He was composer-in-residence at the Canberra Spring Festival, the California Institute of Technology, the Berliner Festwochen, Colorado Musical Festival, Tanglewood Festival, the Banff Centre, Aldeburgh Festival and many others. He also lectured at Harvard, Boston, Yale and other universities.

Robert Aitken invited Takemitsu to Canada for performances of his chamber music in the New Music Concerts series in 1975 and 1983. The close friendships that developed between them, as well as with the members of the Toronto-based NEXUS percussion ensemble and many other Toronto musicians, led to the composition of a number of works which received their first performances in Toronto. Most of the pieces on this recording were personally performed for Takemitsu by these players and benefited from his coaching. The special relationship that continues to exist between Takemitsu and Canada was formally recognised in September 1996 when the composer was posthumously awarded the highly prestigious Glenn Gould Prize, for his exceptional contribution to the international world of music.

And then I knew 'twas wind (1992), for flute, viola and harp, was commissioned by the flautist Aurèle Nicolet's Japanese agent Akira Obi and was first performed by Nicolet, the violist Nobuko Imai and the harpist Naoko Yoshina in May 1992 in Mito, Japan. The title of the work is taken from a verse in one of the longer poems of Emily Dickinson. Before the words of the title comes the line, Like rain it sounded till it curved, which continues, And then I knew 'twas wind. The distinctive instrumentation of the work is identical to that of the penultimate composition of Claude Debussy, the Sonata of 1916, and is meant to be coupled with it in performance.


There are three compositions by Takemitsu on the subject of the Rain Tree. Rain Tree Sketch (1982) and Rain Tree Sketch II (1992, in memoriam Olivier Messiaen) are among Takemitsu's most often performed piano works. The title was suggested by a passage from the novel Atama no ii, Ame no Ki by Kenzaburo Oe: "It was named the 'rain tree', for its abundant foliage continued to let fall rain drops from the previous night's shower until the following midday. Its hundreds of thousands of tiny, finger like leaves store up moisture, whereas other trees dry out at once." In this, the earliest version (1981), the pealing of crotales gives way the metallic spiraling of a vibraphone, which is is set against the wooden weft of a pair of marimbas.

Takemitsu's fascination with the subject of water in all its manifestations has been a continuing theme in his works, dating back to the beginning of his career with his 1963 electronic work, Water Music. Takemitsu composed three versions of Toward the Sea, the first for flute and guitar, then for harp and string orchestra and finally for flute and harp. The first movement of the score was unveiled by Robert Aitken and the eminent Cuban guitarist Leo Brouwer in Toronto in 1981. The thematic seeds of the work are sewn from a pod of three tones carved from the word, SEA: E-flat-(Es in German notation)-E-A. The first movement, The Night, with its sustained flute tones set against the delicate murmurings of the guitar, evokes the rustling of leaves swept by an off-shore breeze. The manuscript of the score was included in the 1983 art book Whales: A Celebration, by G. Gatenby. Listening to the second movement, Moby Dick, one might imagine Herman Melville's great white whale struggling to rise from the depths, while the finale, Cape Cod, conjures up a vision of the glistening Atlantic waters off the coast of New England.


Commissioned by New Music Concerts with the generous assistance of the Canada Council, Bryce is dedicated to Bryce Engelman, the son of the Toronto percussionist Robin Engelman. He relates that "In July of 1971 Toru met my son Bryce who was seven years old. This was the first time my son ever bowed to anyone and the first time a stranger had offered to shake his hand. Toru and Bryce shared an afternoon of origami and later played softball in the backyard. At that time Toru asked me the meaning of my son's name, but I had forgotten. By the next day, Toru had checked it out and told me it meant 'the centre of feeling'. He said, 'I am going to write a piece.' Bryce was first performed in Toronto in 1976". The piece is fundamentally constructed on the relationship between three pivotal notes extracted from the name "Bryce" (B-flat, C and E) and a constellation of eight quarter-tones which orbit around these vertice points. Takemitsu was well acquainted with the proficiency of his Toronto friends and provided for a fair amount of improvisation in this score, including an extended flute cadenza.

Takemitsu's extensive writing for the Western flute incorporates the wide range of microtonal and timbral subtleties characteristic of traditional Japanese shakuhachi performance practices as well as the extended performance techniques of the European avant-garde, including percussive attacks, multiphonics, and singing through the instrument. Two of his works for the instrument were commissioned for and dedicated to the Swiss flautist Aurèle Nicolet. Best known as the principal flute of the Berlin Philharmonic, Nicolet later developed a significant reputation as an interpreter of contemporary music. A student of André Jaunet and Marcel Moyse, he played in orchestras under Hermann Scherchen and Wilhelm Furtwängler until 1959, after which he became professor of flute at the Hochschule der Kunste, Berlin, and then at the Staatliche Hochschule für Musik in Freiburg, a position now held by Robert Aitken.


The three solo flute works here included display three distinct styles that developed over the course of Takemitsu's career. Voice (1971) was suggested by a line of poetry from Shuzo Takiguchi's Handmade Proverbs. Here the stylistic influence is predominantly Japanese, recalling the punctuated, dramatic style of Noh theatre. Takemitsu incorporates into this work a French translation of Takiguchi's lines which is given a supernatural resonance by being recited through and amplified by the instrument: Qui va là? Qui que tu sois, pale transparence? - or, as Shakespeare would have it: who goes there? Speak, pale ghost, whoever you are! Nicolet gave the first performance of Voice in July 1971 at the Festival of Hawaii, an event at which, in 1964, Takemitsu had met and become a friend of John Cage.

Itinerant, In Memory of Isamu Noguchi (1989) belongs to a cluster of short pieces and literary articles commemorating the lives of artists the composer admired and is a tribute to this prominent Japanese sculptor. The work is a synthesis of Takemitsu's mid-period "garden music" concept, a poetic evocation of a sonic journey through "a Japanese garden where everything is unified as in nature, such as stable sand, the endless stream of water, the rocks whose appearance change depending on the observer's angle of perspectives, the trees who absorb the water of the earth, grasses and flowers which rapidly grow". The first performance by the flautist Paula Robison took place in New York in 1989.

Air (1995), Takemitsu's final work, was conceived as a seventieth birthday present for Aurèle Nicolet. The Japanese flautist Yasukazu Uemura first played it on 28th January, 1996 in Oberwil, Switzerland. Shortly after learning that he was to be awarded the Glenn Gould Prize in Toronto, Toru Takemitsu died on 20th February, 1996. He had been suffering from bladder cancer since the previous year, and succumbed to pneumonia while undergoing treatment.


For all, death is inevitable. In the sorrow that grips me I see not the void but the clear blue sky, and I sense the vast realm of undying death. Under no circumstance should we let sorrow close down our lives.
- Toru Takemitsu (1980)


Rain Spell was written for the Japanese contemporary music ensemble Sound Space Ark and was first performed by them in Yokohama in January 1983. Takemitsu's fascination with the subject of water in all its manifestations was a continuing theme in his works, dating back to the beginning of his career with his 1963 electronic work, Water Music. In 1980 he observed, "Thinking of musical form I think of liquid form. I wish for musical changes to be as gradual as the tides".
- Daniel Foley

And then I knew 'twas Wind.
Rain Spell.
Rain Tree.
Toward the Sea.
Voice.
Itinérant: in memory of Isamu Noguchi.
Air.