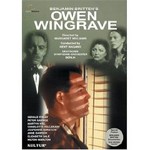 Note: This is a Region 1 DVD - playable only on multizone players.

When Britten started to work on "Owen Wingrave" he conceived the opera both for performance on stage and for TV production. In fact the first TV production of Owen Wingrave was broadcasted in 1971, two years before opera premiere at Covent Garden.

This 1992 production intriguingly tells the drama of Owen, who refuses to follow a military career like his ancestors.

In the second part of this DVD the intense documentary "Britten - The Hidden Heart" tells the story of Benjamin Britten and his life-long friend Peter Pears, with spots on Britten's most famous works "Peter Grimes", "War Requiem" and "Death in Venice".