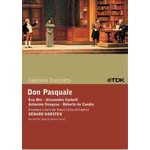 This lavish 2002 production of Gaetano Donizetti's cynically humorous take on love, marriage and romance features the Chorus and Orchestra of Teatro Lirico, conducted by Gerard Korsten, and the voices of Eva Mei, Alessandro Corbelli and Roberto de Candia. It is released simultaneously this month on TDK DVD and Audio CD.

Donizetti's music provides a comic opera sui generis. Coloratura arias, cavatinas and romances, duets and ensembles reveal a musical with which puts the opera on a level with Rossini's Barber of Seville and Verdi's Falstaff.

When Don Pasquale had its premiere in 1843, Donizetti was already marked by the illness from which he suffered. In 1846 he was admitted into an institution in Ivry near Paris with signs of progressive paralysis. He died in his native Bergamo in 1848.