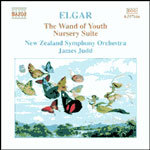 "The freshness of inspiration is a delight, superbly brought out in these fine performances from New Zealand, with James Judd always an idiomatic Elgarian. The Wand of Youth Suites in particular range wonderfully wide in mood and invention; they culminate in the most brilliant movement of all, The Wild Bears, an orchestral showpiece here given a spectacular performance."
(The Guardian April 9, 2004)

"James Judd is a proven Elgarian...this is graceful and affectionate music-making, with a tangible sense of the nostalgic."
-- William Dart, New Zealand Herald

The New Zealand Symphony Orchestra (NZSO) is now in its 54th year. It numbers 95 players and is supported by an administration staff of 25. The NZSO is an orchestra of acknowledged international standing which attracts prominent international artists and conductors. Based in Wellington, the NZSO performs regularly in centres throughout New Zealand.

The New Zealand Chamber Orchestra was founded in 1987, its players being leading members of the NZSO. It performs without a conductor, direct from the first violin chair by its Music Director, Donald Armstrong.

The NZSO and NZCO perform major symphonic and chamber repertoire respectively in seven subscription centres, playing in the region of 90 concerts between them. The NZSO also performs light music, special concerts for families, and energetic education programme for schools, and accompanies opera and ballet.

The NZSO and NZCO are committed to commissioning, performing and recording works by New Zealand composers. In 2000 the NZSO will perform the world premiere of Gareth Farr's Hikoi and will accompany the finalists of the Young Musician of the Year Competition. In a first of its kind in New Zealand, the NZSO will perform the works of the six finalists in the NZSO/Concert FM Music 2000 prize. This competition will celebrate the NZSO's entry into the new century.

To date the NZSO had made three overseas visits - to Australia in 1974, Hong Kong in 1980 and to Expo92 in Seville where it won international praise for its New Zealand Day concert with Dame Kiri Te Kanawa and Conductor Laureate Franz-Paul Decker. In May 1997, the orchestra travelled to Australia and performed three concerts as part of the Brisbane biennial International Music Festival.

The Concertmaster of the NZSO is Wilma Smith, appointed in 1993, the fifth concertmaster in the orchestra's history and the first woman appointed to the position. The NZSO's first Music Director, James Judd, was appointed earlier this year. Maestro Judd is also director of the Florida Philharmonic and will be resident in New Zealand for approximately twelve weeks each year.

Conductors and soloists who have performed with the NZSO have included:

On Elgar:
Sir Edward Elgar occupies a strange position in his own country. For many he is associated with British, or, more specifically, English Imperialism, epitomized in Land of Hope and Glory, a patriotic anthem now sung with gusto and tongue in cheek on the last night of the London Promenade Concerts each year. The image of an Edwardian country gentleman, with his dogs and horses is misleading. Elgar was the son of a shopkeeper, in the days when to be in trade marked a man for life and escape from this background earned a man the name of counter-jumper. He married the daughter of a retired Indian Army general, a pupil of his, nine years his senior, and it was she who gave him the necessary support, morally and socially, that finally helped him to make his way in Edwardian society. Nevertheless, musically Elgar was far nearer to the German romantic composers of his time than to the developing vein of English music, with its pastoral reliance on newly collected folk-song.

Edward Elgar was born near Worcester, in the West of England, in 1857. His father was a piano-tuner, organist, violinist and eventually a shopkeeper, and it was from him that Elgar acquired much of his musical training. He at first made his living as a free-lance musician, teaching, playing the violin and organ, and conducting local amateur orchestras and choirs. His first success away from his own West Country, after earlier abortive attempts, was in 1897 with his Imperial March, written for the royal jubilee celebrating sixty glorious years of Queen Victoria. His reputation was further enhanced by the so-called Enigma Variations of 1899. The oratorio The Dream of Gerontius, which followed in 1900, was less successful at its first performance in Birmingham, but later became a staple element in British choral repertoire. His publishers Novello had not always been particularly generous in their treatment of him, but he came to rely on the encouragement of the German-born Augustus Johannes Jaeger, a reader for the firm, who found in Elgar's music something much more akin to the music of his native country.