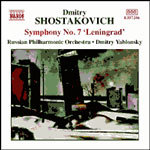 Few symphonies since Beethoven's Fifth have attracted the degree of extra-musical speculation accorded Shostakovich's Leningrad Symphony. Although ideas for a Seventh Symphony had begun coming to mind the previous year, the work that emerged has been regarded as an uninhibited response to the Nazi invasion of the Soviet Union in June 1941 - the ensuing siege of Leningrad lasting for 870 days and costing over a million lives.

Shostakovich began working on the new symphony in the besieged city that July, completing the first three movements by the end of September. In early October he and his wife and children were evacuated, first to Moscow and then to the city of Kuibyshev (later Samara). He finished the whole work towards the end of December.

The first movement begins confidently, the striding opening theme on strings in strong contrast with the pastoral theme, featuring delicate contributions from woodwind, preceding it. This fades out, to be replaced by an idea on pizzicato violins over a quietly insistent side drum rhythm. Thus begins the notorious 'war machine' crescendo, which replaces the expected development section. Pizzicato violins are succeeded in turn by flute and cellos, upper woodwind and strings, alternating oboe and bassoon, muted brass, intertwining woodwind; then violins, full strings, horns and violins, brass and strings, upper strings and brass with percussion, finally the full orchestral panoply, assisted by three side-drummers. A new martial theme suddenly breaks in, driving the movement to a dramatic apex where its opening theme sounds out in baleful, brutalised terms. The music calms to a wistful recall of the second theme, presaging a stoical recall of the first theme by bassoon over detached piano chords. Sombre brass motifs frame an achingly nostalgic transformation of this theme, then pizzicato strings and distant side drum quizzically recall the 'war theme' to round off the movement.

The second movement is a rare example in Shostakovich of a symphonic intermezzo, evocative but essentially abstract in nature. The violin's elegant opening idea is followed by a plaintive melody for oboe, accompanied then succeeded by strings. The shrill woodwind and vaunting brass of the central section lead to a martial theme which echoes that of the preceding movement. The opening theme is recalled, then the plaintive melody on bass clarinet, imaginatively accompanied by harp and flute. The first theme makes a hesitant final appearance, and the movement ends in uneasy repose.

Plangent woodwind open the third movement with a Stravinskian chorale (the Symphony of Psalms was a work Shostakovich studied intensively both before and during the symphony's composition), answered by an impassioned threnody for upper strings. The contrast is reiterated, followed by a bassoon rejoinder. Over pizzicato strings, flutes sound out a pensive melody to which other woodwind add their counterpoints. Strings gently take over the theme, bringing it to an avowedly Mahlerian resting-point. The agitated central section now bursts in, goaded on by strident brass and a raucous side drum. At its peak, the initial chorale reappears on full brass, tailing off into a heartfelt recall of the strings' threnody. The flute theme cautiously re-emerges, transferred to lower strings, before a recall of the threnody and its bassoon rejoinder bring the movement to a sombre close.

Without pause, the finale opens with a fragmented theme sounding uncertainly on upper strings and icy woodwind. A tramping rhythm for lower strings sets off the first main portion of the movement, an energetic allegro building to a powerful, martial climax on full orchestra. A trenchant rhythmic episode, which makes prominent use of col legno strings, slows activity, the central section bringing elegiac exchanges between upper and lower strings, pointed up by solo woodwind interjections. The music dies down to a hushed recall of the movement's opening idea, emerging from the shadows as, propelled by a revolving rhythmic motif on lower strings, it gradually gains intensity and momentum. Various ideas from earlier in the movement are alluded to as the music drives forward, eventually arriving at a resplendent transformation of the work's opening theme. From here the symphony presses on to a combative and determined, but by no means optimistic or triumphal conclusion.

Reaction to the Seventh Symphony has been one of extremes. The first performance, in Kubiyshev on 5th March 1942, and the Moscow première three years later were broadcast nation-wide. Microfilmed and flown, via Tehran, to London, the work was broadcast by the BBC on 22nd June, heard at the Royal Albert Hall a week later, then given a studio performance in New York under Toscanini on 19th July. In Leningrad the following month, a much-depleted Radio Orchestra, reinforced by any musician who could be released from combat during the siege of the city, gave an account which personified the heroic aspiration of the music itself. Hundreds of performances followed during the remainder of the war, after which the work fell out of the repertoire, criticized for its excessive length and loose-limbed elaboration of ideas. Since the composer's death in 1975, it has gradually returned to favour, now with the added possibility of its inspiration stemming as much from Stalin's atrocities during the 1930s as from Hitler's subsequent brutalities. Whatever the motivation behind its genesis, Shostakovich's Leningrad Symphony stands as a testament to heroism and human endurance amid overwhelming conflict and cultural crisis.
- Richard Whitehouse