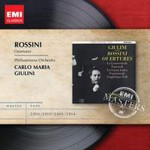 "Giulini plays these pieces with plenty of charm, taking full advantage of the brightness of the Philharmonia's violins. The orchestra's sound is sumptuous."
(MusicWeb Oct 2008)

"Giulini plays these pieces with plenty of charm, taking full advantage of the brightness of the Philharmonia's violins. His approach is unhurried, generating pace from precise and incisive articulation rather than sheer speed. The orchestra's sound is sumptuous."
(MusicWeb Oct 2008)

Carlo Maria Giulini, born in southern Italy in 1914 with an apparently instinctive love of music, was brought up in South Tyrol. Later, in Rome, he studied at the Academy of St Cecilia, played the viola in the Augusteo Orchestra and enjoyed chamber music. As a conductor, his repertoire was influenced by his Catholicism (sacred music loomed large) and by a refined taste in opera and orchestral music. His Italian roots and his love of Italian opera are both reflected in these performances of overtures by Rossini. In 1955 Giulini was introduced in London by the producer Walter Legge, whose Philharmonia Orchestra features in these famous Rossini recordings, made in the late 1950s and early 1960s and reissued here for the first time complete on one CD.